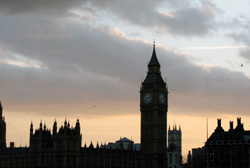 Refreshed after our siesta, we took the Tube to South Kensington, passing a street performer playing "The Lonely Goatherd" on an alto saxophone to a "Best of the Sound of Music" Karaoke CD. We visited the Victoria and Albert Museum near closing time which was uninspiring except for the collection of old musical instruments tucked away in the back. We also power-walked through the rather boring collections of ancient furniture, where we were accosted by a crazy guy in lipsteak and sweat pants who told us that we simply must visit the Lacquer Box because it was brilliantly beautiful. We edged away as quickly as possible, and later encountered him in another room mumbling to himself (we never did find the Lacquer Box). 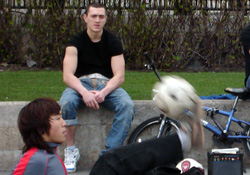 The museum closed at 5, so our next big adventure was to take one of the big red double-decker buses to Picadilly Circus so we could walk around the more tourist-y areas in the evening. We arrived at Trafalgar Square, home to eight million pigeons and an enterprising Asian who was earning pence by balancing a soccer ball on his head. He was accompanied by a muscle-bound British guy whose job it was to restart the CD whenever the music ran out -- eventually he felt left out of all the attention and did a couple back handsprings to make sure that we noticed him. After this, we proceeded to walk a giant circuit: across the Golden Jubilee bridge over the Thames, past the London Eye, back over the Westminster Bridge, past Big Ben and the Houses of Parliament, and then back to Trafalgar Square. 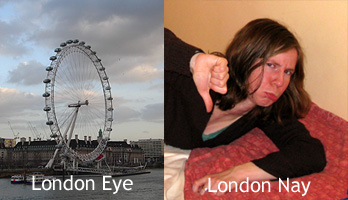 Americans are naturally sedentary, so all this walking made us pretty hungry. By now it was almost 9 PM, and some of the restaurants had stopped serving food. We finally ended up at the nonsensically-named "Lord Moon of the Mall" pub (which, incidentally, is also the title of the next Final Fantasy game). I ate sausages and mash with a Guinness, while Rebecca had the cottage pie and a Festival Sampler ale, and we both marvelled at the advertisement for imported Coors Light which was just slightly cheaper than a Guinness. The food was bland and not too tasty -- in fact, the cottage pie made Rebecca nauseous so we headed back to our room.

After a plain but filling (and free) breakfast of cereal, toast, juice, and coffee at our hotel, we hit the ground running with a trip the the British Library's "Rare Documents" room. While Rebecca geeked out over the first editions of various great works of literature (like Alice in Wonderland and The Pelican Brief), I admired the musical manuscripts. At the far end of the chamber was a computer with one of Mozart's theme sketchbooks digitized, and each fragment in the book was tied to a sound file so you could hear what it sounded like in its draft form. The Library also housed a massive collection of stamps, but stamp collecting is about as useful and interesting as collecting the lids of margarine containers: sure this Country Crock lid might be Calcium-enriched, but at the end of the day, you're still collecting a bunch of useless objects that all look the same. 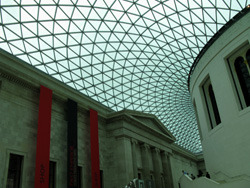 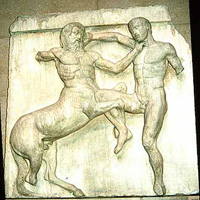 Our next stop was the inapproriately-named "British Museum" where none of the artifacts actually came from Britain. Every exhibit was well-documented and included justification as to why it was okay to plunder former British colonies of their heritage. We spent several minutes in the Greek wing looking at the Elgin Marbles, a collection of sculptures and bas reliefs depicting various centaurs humping people, and marvelled at the fact that the wee-wees were missing from every single statue. No doubt, somewhere out there is an archaeologist's family whose treasured heirloom is the stone penis of Hermes.

Because it was the off season, many of the wings of the Museum were closed (including the North American wing -- I would have liked to see what they thought of us). We did get to see two special exhibits: one on the history of money, and one called "Life & Dying: Cradle to the Grave" (which I always thought was just a movie starring DMX and Jet Li).

To prevent museum-fatigue so early in the trip, we had a couple pints in North London and relaxed for a bit. I also saw an advertisement for an upcoming run of Spamalot, starring Alan Dale as King Arthur. Alan Dale is also the actor who plays Charles Widmoore in LOST, so it looks like we won't be learning anything new from him for several episodes (at least until the Spamalot run is over). 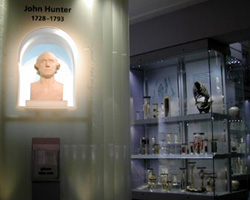 Enroute to our next stop, the John Soane Museum, we stumbled across a real find that wasn't in any guidebooks: the Hunterian Museum of science and surgery

. It was absolutely free and contained thousands of gross things pickled in formaldehyde, from frogs to tumors to gunshot-shattered bones, as well as paintings of rare conditions like Siamese twins and dwarves. After that find, the John Soane Museum was interesting but not amazing -- over the course of his life, he bought one of everything and stuck it in his house until it looked like a museum, and then had it turned into a museum as-is after his death. 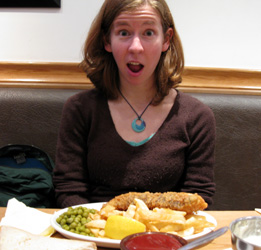 The evening was concluded with the traditional Fish and Chips meal at Sea Fresh which turned out about as tasty as the one at Red Robin and came with bonus ice cream. After dinner, we hit the Prince of Wales pub near our hotel where we sat at the bar for a few hours talking with the locals and listening to their novelty-filled accents. We tried the long-pull beers tonight: Taylor, London Pride, John Smith, and Strongbow Cider.