Euro-tic Adventure, Part I of X 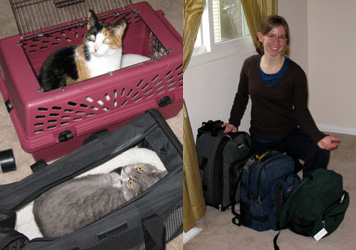 With the cats successfully sent off to grandma's house and our ridiculously tiny bags packed, we were dropped off at Dulles by Anna around 4 PM on Monday the 31st. After successfully navigating the always-flustering security checkpoints, we arrived in Concourse D which was chock full of every brand name store possible, from Border's to Starbucks. Travelling 100 yards down the concourse brought us to exact duplicates of these stores, making me worry for a moment that we had actually circumnavigated the globe in a looping terminal straight out of an Infocom game.

This was my first international flight, a nonstop affair from DC to London in 8 hours, and I was surprised by how many gadgets were available. We flew United, and each seat had a video monitor in the headrest where you could choose from the movies of the month (Juno, Dan in Real Life, and Enchanted), several TV shows (like House or King of the Hill), or a GPS view of where the airplane was at all times, how fast it was going, and how could it was outside (-72 F).

I spent most of the trip enthralled with the mapping feature while listening to the built-in XM Radio. Dinner consisted of some tasty bacon-flavoured green beans and some nasty chicken squares which tasted like damp hackeysacks (we resolved to get the Pasta option on the return flight). Because we had a night flight, we tried to get some sleep so we could tackle London at full strength, but this was only partially successful. I probably managed to sleep until Greenland after which I woke up with an uncomfortable crick in my neck, tired enough to confuse the light on the end of the wing with the Moon. Gone are the days where I could fit my entire body into a fetal upright position and stay comfortable, not to mention that I was sharing the row with Rebecca who is a giant and takes up at least four seats with her shoes alone. Luckily, the plane wasn't too crowded, so we had three seats for the two of us.

My first view of the UK came at dawn, with endless rows of identical houses and really skinny backyards. Everyone was driving on the left side of the road, proof that this was a real phenomenon, and not just some myth made up to make American left-handers feel better about themselves. We disembarked deplaned around 7 AM London time (five hours earlier than Virginia) in a chilly rain, and were herded to the Passport Control warehouse where the lines were divided into UK/EU passports and "The Rest of the World" (which had the snide caveat "including the US" attached in italics). Our line queue looked like the entrance to the Superman Tower of Power theme-park ride (before it chopped that girl's feet off) while the EU passport-holder breezed through without a wait.

After an hour wait and copious promises not to import any snakehead fish in our pants, we were dumped into the London Underground, where a helpful Tourist Information official showed us how to use tube tickets and nudged us towards the Piccadilly line train to Cockfosters. Sadly, we never actually visited Cockfosters (or for that matter, East Ham or Tooting Broadway). Despite the oversaturation of ads, I was impressed with how clean, helpful, and efficient the Tube was when compared to the only other Metro I've ridden on in DC. Tube announcements (and London in general) was brimming with charming, almost-apologetic information, like constant admonitions to "mind the gap" in stations where the platform and the train are a few inches higher or lower. In the states, such a situation would never occur, since engineers would be deathly afraid of a lawsuit from someone tripping. 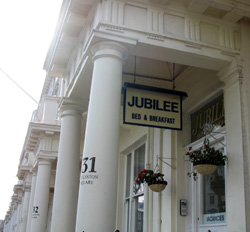 Our Bed & Breakfast was near Victoria Station, and after a little orientation around our Tube exit, we arrived at a cramped but clean building on Eccleston Square recommended by no less than Rick Steves himself. Our rooms wouldn't be ready for a couple hours, so we dropped off some bags and wandered into the city to find breakfast. We ate at the Caramel (a bacon & egg sandwich with a pain au chocolat for me, and an omelette for Rebecca) where we were first introduced to the social norms of picking our own table, and peeing in the basement.

Even though everyone around us spoke English, we were very self-conscious that first day (highly contrasting our return trip to London two weeks later when just HEARING English was a relief). We were also in pound-shock this day -- prices in pounds made perfect sense if the pound were a dollar (for example, a hamburger and fries might be 8 pounds), but the exchange rate was double, so that 8 pound burger was actually costing us 16 dollars. We eventually had to learn that you CANNOT convert the price into dollars in your head or you'll constantly be faced with buyer's remorse or shy away from enjoying your trip. This took about 4 days to learn. 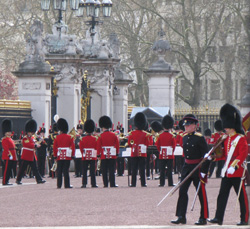 After breakfast, we walked a half mile towards Buckingham Palace to drop in on the Queen. She was out, but we got to experience the Changing of the Guard. Unfortunately, all the prime ogling spots were taking, but I experienced it virtually with the ridiculous zoom on my camera. This picture here was taken from at least 100 yards away from the action, through a fence and over the head of some snotty French middle schoolers on a field trip. From the palace, we wandered through Monument Park, which had a haphazard monument for every event you wouldn't really care about. There may have even been a monument celebrating New Zealand. At this point (1 in the afternoon), jet lag was catching up to us, and we wandered back to the hotel for an afternoon nap.