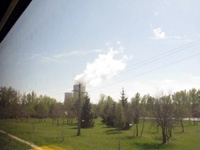 Throughout the trip, we learned a great deal about the conversion between Celsius and Farenheit. For example, 28 C = 82 F and 20 C is room temperature. The average temperature in London was around 12 C, and the average temperature in Paris was 7 C. However, we did not need to pass our SATs to know that -2 C is very cold. We woke up early (around 6) on Monday to make a train, and were greeted by a cold, slimy, sleet & snow mixture with wind gusts up to a million kilometers per hour (evidently I need work on my distance conversions). It was the perfect type of day to spend in a warm train, and we checked off Day 1 of 5 in our Eurail Saver Pass. This pass lets you travel for free on five days out of two months as long as you travel with a friend. Because of our changed itinerary, we only ended up using 3 days total, but the convenience factor was still very nice.

One of the things that set Paris apart from London was the prevalence of graffiti in every subway and train tunnel. This did not change as we went further south -- if anything, we saw MORE graffiti everywhere. The trains also travelled through the worst-looking parts of the cities we passed through (Tolouse and Bordeaux, for example) but it's as if no one seemed to care. If you were to walk through a portion of D.C. with as many tags on the walls as Toulouse, you might fear for your lives, but in France, you eventually just accept it as part of the landscape. 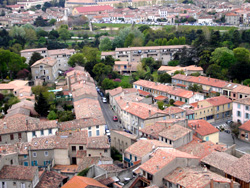 Our train encountered multiple delays, so that we didn't arrive in Carcassonne until around 5. By then, we were tired of trains and the ridiculously edgy X-files sound effect they used for station announcements

. We received a mail-in rebate form from the train company for the delays, but all the forms were in French, and it didn't seem like a worthwhile use of our time.

Dumped in Carcassonne, we immediately purchased a 3 euro ($4.50) map of the city from the magazine stand in the station, only to walk outside and discover a Tourism Kiosk right across the canal (this was rip-off #2 of the trip). In the kiosk, we received a map of the entire city (which was only a few square miles), restaurants, hotels, and all their prices and locations. We used this guide to create a list of cheap hotels and started walking through the city. 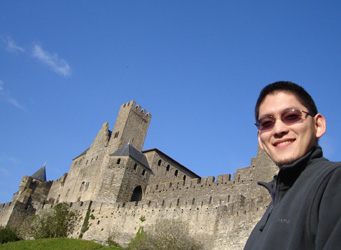 We ended up at the Hotel Central, where 40 euros scored us an excellent spacious room with a shower and sink (bathroom down the hall). After being on the train all day, stumbling into this city and finding this hotel felt like winning the lottery -- it was very central (as advertised), inexpensive, and charmingly decorated. Hoping to tell all my readers about our trip so far, I asked the desk clerk where the nearest Internet Cafe was (every hotel we stayed in had Wi-Fi, but I don't have a laptop). She gave me directions and told me to look for the Seabird Cafe. It wasn't until the next day that I realized that that's how you pronounce "Cyber". 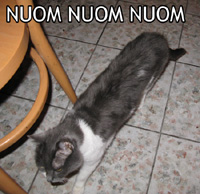 With our room straightened out, we wandered toward the edge of the city and found a gigantic walled city looming on the skyline above us. With no other tourists around, we had our pick of restaurants, and ate at the Il Ponte Vecchio beneath the walls. This was a tiny Italian restaurant with a resident cat named Nuom who sat with us during dinner and the strains of Michael Ball singing American showtunes playing over the speakers (I suspect the workers put it on just for us). The food was delicious although it was a little weird to be eating all alone in a restaurant. After dinner, we took a stroll through the grounds of the walled city (which many people still live and work in) and walked along the outer walls, enjoying the novelty of being in a castle. 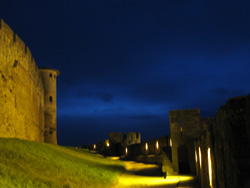 To close out the evening, we had wine and strawberries in our hotel room and watched a French reality show called C'est du propre where two French ladies teach a slob how to clean his apartment.

We were so enamoured with Carcasonne that we decided to stay one more night here. After reserving a train for the following day, we wandered along the canal and through the lower city. Carcassonne had two parts -- the walled city on the hill, and then the trade city down below (where we stayed). The trade city seemed like a microcosm of Paris, allowing us to do the parts we enjoyed the most (wandering around and exploring neighbourhoods) all compressed into a square mile. Roads through the city were barely one lane wide, and pedestrians were everywhere. They had a McDonald's by the train station, but otherwise they were free of American culture. Every shop seemed to have dogs and cats wandering freely inside, although most of the dogs were of the tiny kickable variety. 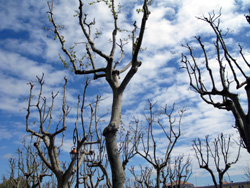 For lunch we ate (alone) at the Lotus d'Or, a Chinese restaurant decorated with covers from the Rin Tin Tin comic book series. The food was delicious, and we learned that Chinese people in France speak much better French than Chinese people in America speak English. However, we did not receive two free eggrolls with our meal.

A slight misunderstanding meant that we did not get our 1/2 bottle of wine (free with the meal) until after we had finished the food, but that made for some fun tipsy wanderings in the city during the afternoon. By 2, we had exhausted the possibilities of the lower city and returned to the walled city, marveling that it must be really neat to be a resident who wakes up every day and sees a castle out the window. 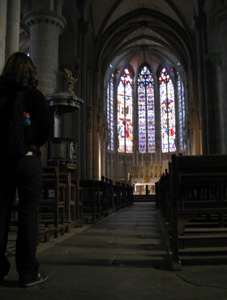 In the afternoon, we took the tour of the main castle, explored the chapel, had a chocolate eclair, and bought a white French poodle named Pierre. I also ogled the cool medieval weaponry sold in the gift shops, but reasoned that we probably would not be allowed to keep it in our carry-on bags. A lone fellow with a pan flute serenaded us as we left the walled city and walked along the banks of the Aude River. Apparently, there was a military school somewhere in town, as we passed three or four squads of young ROTC-like trainees with camouflage on their faces, heading purposely towards the castle. We were undecided as to whether they were going to storm it or defend it though.

As night fell, we walked through the last unexplored sections of the lower city, but found nothing worth seeing. It felt like we had spent the perfect amount of time here -- a night and a day will let you see everything there is to see and not get bored. The only thing we missed out on was the Parc Australien which apparently had baby kangaroos, but it was a couple miles outside the city and required a car to get to. Carcassonne is definitely a must-see site if you ever come to France though! 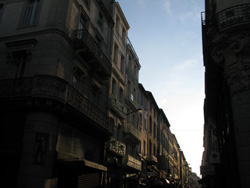 On Wednesday, we were up bright and early to catch the train to Collioure. Because so many people take the train, ticket-checking was lax and we totally could have hopped on for free without anyone knowing. We arrived in Collioure around 10 AM, after driving through the graffiti-filled Perpignan. On an unrelated note, you poop a lot more in Europe than the States, so from this point on, I referred to the act of taking a dump as the more polite "going to Poopignan".

To Be Continued on Monday...

You can view the Carcassonne pictures here

Burglar loses fight with the blind

Gangsta granny threatens to shoot it up