Memory Day: The Preserved Past 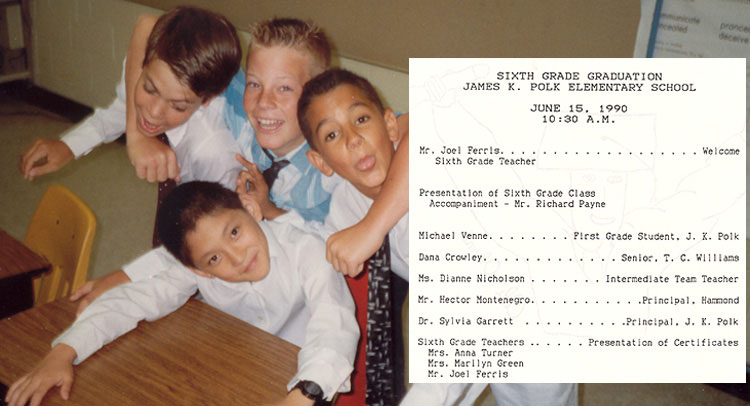 1990 was the watershed year when Aaron Ulm, Josh Lambert, Sharif Ahmed, and BU graduated from the SIXTH GRADE, a feat which is just slightly more impressive than beating Super Mario Brothers with a Game Genie inserted for permanent invincibility. Every speechmaker you might expect appeared at this ceremony: the musical arrangement by the vocal music teacher (who worked for at least four different schools), a first grader (who said "I wanna be like you!"), a senior (who said "In six years you'll be like me!"), the smart kids TAG teacher, the principal from the elementary school, and the principal from the junior high school we would soon be attending. 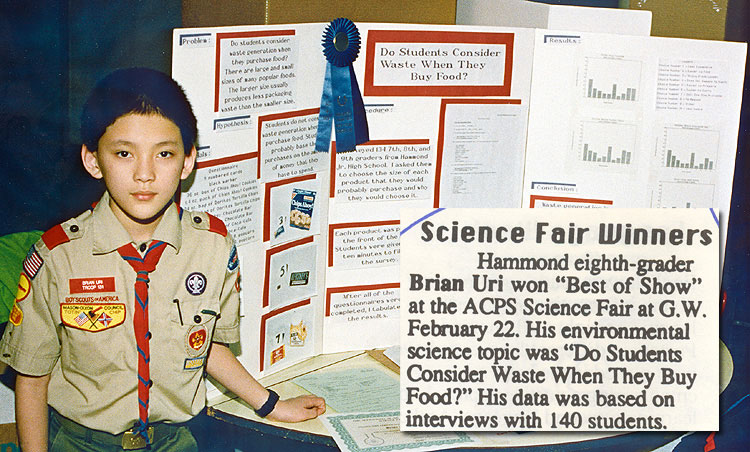 In 1992, BU wins Best in Show at the high school science fair. His father makes him wear his Boy Scout uniform to the event to impress the judges during the question-answer period (which, judging from the picture, made BU very happy), and the blue ribbon is far overbalanced by all the high school kids making fun of him for the entire fair. 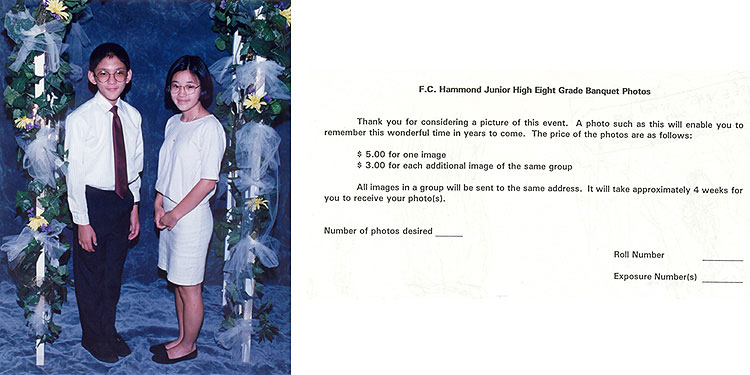 The year that our junior high school turned into a middle school, BU was a graduating freshman, about to go into 10th grade at high school. All the eighth graders were sent to a limbo quarantine with nothing but ninth graders in it. Because BU's class got a faux prom for graduating, the eighth graders complained that they should get one too, and it was held in the school cafeteria with BU's dad as the photographer. As a result, the Uri progeny spent the evening shuffling annoying eighth graders around, taking photo orders, and checking the lighting of the scene by posing. At least three of BU's comics were sketched on the backs of these order forms 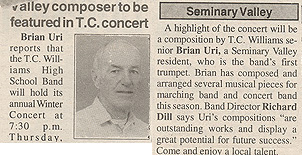 What's the most efficient way of getting your name in the local paper almost every other week? Simply find the guy who writes the neighbourhood column and get a job where he pays you $5 for every neighbourhood story you bring in. $5 a week for pimping yourself isn't a bad rate, especially when you don't have to put out.

Said Brian, "My experience at Pepco has taught me that delivering mail is inefficient when the mailboxes are not in alphabetical order, there are these things called chat rooms on the World Wide Web, and you can take over the computer of the highest-paid person in the company if he's on vacation and you argue that a fancy computer is a necessity for the high-tech work that you do. Brian is pictured here in one of the Vice President's offices, because "the computer in my cube doesn't have enough ???? for this single web page database you want me to program".