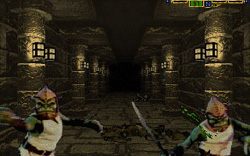 ♠ Writing about the Paper Mario series yesterday reminded me that I have outgrown the age of gaming nirvana. There was a time when I could buy, play, and beat nearly every game in existence, when people didn't have jobs, TV shows didn't have seasons on DVD, girls had cooties, and even the weakest game was worth a complete playthrough (I even beat Stonekeep).

♠ Nowadays, it's the rare game that will convince me to play for more than a few days at a time. Even with highly enjoyable games, I'll buy with every intention of playing a lot, and then letting it atrophy after just a week. I think I've even reached the point where I'd rather beat Doom 2 just one more time than invest time in a brand new game. Clunkers like Super Paper Mario don't help this.

♠ However bad SPM might be, at least they are not as bad as this TATU song

(MP3) titled NOT GONNA GET US. The caps and the bold tags are an integral part of the title, as you will hear if you dare to listen to the sample, which may or may not feature a chihuahua on vocals. I'd sooner trim my toenails with a pair of kindergarten safety scissors than listen to an entire album of this. I don't even think the song would improve if the singer could speak English.

♠ Speaking of English, I listened to two units of a random "Learn Spanish Now!" CD for kicks, and can now greet people and ask if they speak or understand me. Of course, I don't even know how all these words are spelled, so maybe I should install a TV with over-the-air HD on my dashboard to watch Telemundo on the way to work. "Amo Booty!" 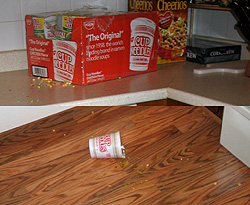 ♠ The other day, Booty ate a Cup O' Noodles from the bulk crate of Cup O' Noodles I had sitting on my counter. I think she's learning to read English and misread it as Cup O' Bootles.

♠ The reason there's a bulk supply of Cup O' Noodles on my counter (rather, safely in my closet now) is because I'm going to Bethany Beach with Rebecca next week. This means that there will probably not be any updates until Monday the 17th, since I'll be busy doing science experiments at the point on the beach where the nuclear waste from Jersey mixes with the chicken waste from Delaware (with sexy results).

♠ Since I will miss a bunch of birthdays, happy birthday to Liz Fuller on the 11th, Becky Durham on the 12th, and Kevin Moorhouse and (not-the-real) Chris Smith on the 15th! I will also be celebrating my birthday on the 15th, probably with some form of illegal fireworks and/or firearms.