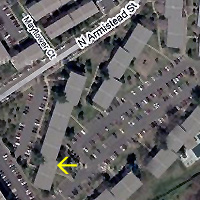 The Babysitter's Apartment:
On the ground floor of Mayflower Square, a solidly Latino apartment complex before it was hip to be Latino and densely populated, lived our babysitter who cared for us until the year I finished kindergarten. The nearest elementary school had every other grade, so my sister had to take a bus across the city to Jefferson Houston for first and third grades. The apartment looked over a one hundred foot hill which was perfect for cramming onto a tiny Tonka dumptruck and riding to the bottom without falling off. This was also the place where I got a scar on my thumb from a bathroom razor, had to sleep in the closet with the cucharachas because I changed the channel from The 700 Club during my morning quiet time, and accused Rashaad and Sunshine (fellow babysittees) of trying to steal my Transformer (the one that transformed from a pterodactyl into a cassette tape) by hiding it under a bed and hoping I wouldn't notice. 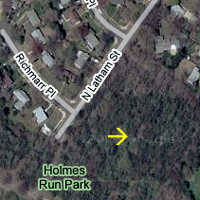 Dirt Bike Track:
In the woods near the creek, we discovered someone's meticulously fashioned dirt bike track, complete with hills, ramps, and jumps. We would pretend we were daredevils on our BMX bikes, performing dangerous jumps and races for hours until we were covered in mud. The track was less than a quarter mile from a popular campsite of homeless people, so we were obviously forbidden to come here by our parents, but we always reasoned that five junior high school kids on bikes were invincible. 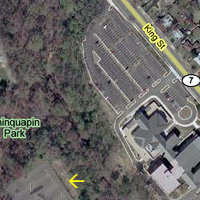 Softball Field:
Our Boy Scout troop met at the First Baptist Church on King Street. Because it was Baptist and in the South, it was massive -- even large enough to house an obese congregation from Houston. The church owned lots of forest land next to Chinquapin Park, and build a private softball field and volleyball field. Every July in our troop was "Sports Merit Badge" month, which was code for "everyone is too lazy to actually work on a real merit badge so we'll play games and invite the parents so they can watch their own damn kids". Imagine my surprise when I Googled the location and found that the church had transformed the fields into a parking lot at some point in the past ten years. 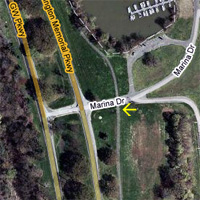 The Marina:
In Crew, runs came in three sizes: a "pleasant" 2 mile run to the horribly polluted coal power plant, a 3.5 mile run to the marina, and the dreaded 7 mile run to National Airport. As a coxswain, I didn't have to go running with the boat, but always felt like they'd listen to me better if I put in the hard work (though funnily enough, I always seemed to find an errand to run for the coach during the 7 mile runs). Seeing the intersection of the bike trail with the road into the marina was always a pleasant sight, because it meant I could turn around and start lollygagging home. 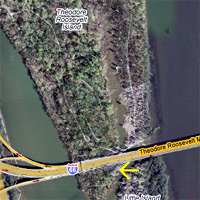 Theodore Roosevelt Island:
In tenth grade biology, I did a science project on the pollution of bodies of water in our area, taking samples from all over and then testing them with high-tech equipment (such as the fish-pH kit from your local Wally's Aquarium). I came to such brilliant conclusions as "the water near Theodore Roosevelt Island has a high copper content, probably because the bridge that goes over the river here is plated with copper". It didn't matter anyhow, because our teacher was old and lazy (and old), deciding two weeks into the project that it would be an oral report. My dad made me finish the written report anyhow.

Student suspended for We Suck prank

At I.B.M., a Vacation Anytime, or Maybe None