♠ The final portion of Extreme Makeover: The Three Year Home Edition has begun and there are now six-hundred-forty-five square feet of carpet in my basement, ready for unrolling. My dad and I tried to go with the fifteen-foot carpet rolls this time around since the space is so big down there. They're a little more awkward than a standard twelve-foot roll (not unlike a social face-off between a software engineer and a systems administrator), and ooze off the tailgate of the truck like a drunk Mexican on permanent siesta when you try to get them home.

♠ Before I tore down the basement, I had one final party there, mainly to celebrate my 28th birthday with four hundred of my dearest friends. We ate giant steaks, two kinds of mashed potatoes, and a variety cheesecake pack called "Sweet Temptations" (It was sweet). After that, we played caption games, drank lots of Guinness (or wine, in the case of Rosie), and then played several rounds of pool. 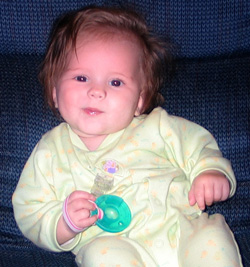 ♠ Anna and Ben didn't come because they are no longer my friends, but while transferring the above picture from my camera to my computer, I discovered several cute pictures of Ella looking coy on my couch, just like this one. If you don't think this picture is cute, you have no soul. For more cute Ella, look at this

♠ There are enough readers with babies (or expecting them!) now that it's high time we had a baby-off. Every reader with a baby could bring them over to my place, dress them up with tiny American Gladiator costumes, and put them in the ring. The last baby standing (or sitting up, or lying on their back, depending on their age) will win a $5 gift certificate to Amazon.com.

♠ Speaking of Amazon, I'm expecting my shipment of Heroes, season one, and Prison Break, season two any day now, because I don't already watch enough DVDs. Which should I watch first?

♠ I also finished the first season of Dexter, the story of the serial killer who only preys on criminals that slip through the cracks. The show was outstanding and no more disturbing than any given torture scene in 24 (most of the flinchy or truly gory stuff is implied off-screen, although there's lots and lots of blood). Michael Hall gives a great performance, and after just a couple episodes, you'll forget that he was ever a gay mortician on Six Feet Under. I highly recommend this series, especially if you are weird like me and have a fascination with reading about serial killers. Once you reach episode eight or so, make sure you have an evening blocked off, because you won't be able to watch any of the last four episodes without wanting to watch them all at once!

♠ At my birthday party, it was recommended that I open Uri!flix because I own more TV shows on DVD than God. A lot of people argue that owning a TV season on DVD is a waste of money in the days of downloadable episodes, but I always reason that thirty bucks for sixteen hours of entertainment isn't bad at all, especially since I tend to watch them multiple times and lend them out to friends. It's no worse than going to the movie theatre and buying a bottle of tap water and a movie ticket for sixteen dollars.

♠ When we went to the beach last week, we brought along 35 bottles of Costco water and 48 bottles of Yuengling. By the end of the week, all the water was gone, and there were only 2 beers left. This is because we spent most of the week drinking, and eating fruit dipped in chocolate.

♠ Dipping chocolate kind of sucks after it starts to harden. After looking like poop, it looks like the brittle and tasteless microwave brownie found in the Banquet TV dinners from the 1980s (part of this complete dinner including corn, some kind of jelly side, and two pieces of fried chicken).

♠ Speaking of fried chicken, it's Friday, and time for Popeyes! My weekend plans include some work on taxonomies, a trip to some Improv Show in DC, and some work in the basement. Happy Birthday Judy on Saturday. Have a great weekend!

The cat was called Socks after staff changed the results of an online poll. Viewers wanted the cat named Cookie.