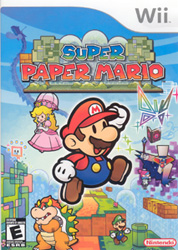 A little over four months ago, I posted a review of Super Paper Mario for the Wii

, giving it 3 of 5 stars and calling it a little tedious but showing enough signs of improvement for me to continue playing. Now that I've played it in fits and starts since then, I feel compelled to update the rating I gave it originally (so all two readers with Wii's can avoid it and save their money for my birthday present).

When we last left the game, I had just finished Chapter One (of eight) and the game was starting to feel more like its beloved prequel. Sadly though, it hit its high point around Chapter Three, and turned into a textbook exercise in tedium. If I were to write a Museday Tuesday song called Tedious it would feature the unimaginative and grating soundtracks from this game. If you were to look up the word, tedious, in the dictionary, you would find a picture of this game. 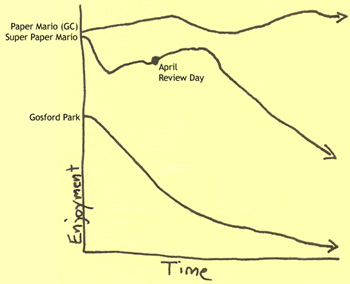 SPM does not fare well on the official BU Enjoyment Over Time chart, as you can see on the right. One major issue is the control scheme -- it's not complex at all, but the game throws so many options at you that you forget all of the available possibilities. By the end of Chapter Seven, you have a dozen retarded helper sprites that give you special powers (but you can only use one at a time), and three playable characters that each have yet another special power. If keeping track of these isn't bad enough, one of the special powers forces you to hold the controller like a pointer on the fly, which is a lot more clumsy than it seems since 90% of the game is played with the controller in a standard sideways position. Picture trying to play a version of Soul Caliber where every single attack combo is required at some point, and then make it so you have to go into a menu to switch between each combo. This is about as fun as turning on the Closed Captioning on your TV and compiling a list of places where the transcriber got lazy and used different words from the broadcast.

After Chapter Four, level design takes a nosedive like Pete Doherty in the champagne room. One Chapter actually begins with a directive to "kill this enemy one hundred times, with thirty seconds of cutscenes between each fight". The game thinks it's doing you a favour by ending at twenty-five, but I was ready to quit by enemy number three. Another world uses the tired "it's dark in here and you can only see a little bit in any direction" shtick mixed with the annoying "this room is nine million stories tall and we'll make ghosts appear in thin air so you'll fall all the way to the bottom and have to start over" motif. I finally made it to the end of Chapter Seven and quit for good. Even my OCD penchant for completeness couldn't convince me to go on. 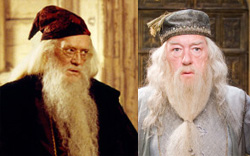 Just because they called the game Paper Mario doesn't mean it has anything in common with the older and better games. It's like they replaced the original Dumbledore with a Gandalf clone and hoped that no one would notice, but for no good reason. Richard Harris didn't even star in the original Paper Mario.

For editorial soundness, I pulled out the original Paper Mario: The Thousand Year Door. I wanted to see if I was just viewing a three-year-old game through happy nostalgic lenses, or if it really was as good as I remember. I'm now four hours into it and loving it just as much as I did when I first played it, even though I already know the whole story and all the secrets! It's amazing that the exact same company wrote both games -- did everyone from the original team quit to do infomercials? I guess we'll see if the same thing holds true when the "new and improved" Pixar Studio tries to make Toy Story 3, 4 and 5.

Revised Rating: 1.5 of 5 stars (only for masochists, collectors, or the ridiculously bored)

No more steamed crap for dinner

Bargoer learns to keep his pants on