I'm excited that the next book in Janny Wurts' Wars of Light and Shadow series is coming out just after New Year's in 2002. Although the series is rife with interminable descriptions, tortured prose, and uses fifteen words where three would suffice, it still ranks as my favourite fantasy series. However, most everyone else I've tried to impress the books upon has found them too slow to start and too long to finish. I didn't much like the first book when I originally read it back in high school, and it took a few persistent read-throughs before I really appreciated it. To give you an idea of the length of the series, the author has planned the story to be told in five major books from start to finish, and the first book was about seven hundred pages in paperback. The second book of the series actually had to be split into two parts (each about the size of the first book) because the binding would have fallen apart otherwise. Peril's Gate, which is the volume being released next month, is part three of four of Book Three. A new volume is released every year and a half or so, so it could be years before I get to finish the story. I just hope a tragic mishap doesn't occur, preventing the author from completing the books, because that would really piss me off.

Still no word on the results of the listening exam yet. I should probably finish off the works I didn't get to, just in case, although I can say for certain that all the ones I missed on the exam were ones I knew, but forgot.

"It jumps your musical cholesterol." - Dr. Bachelder on secondary dominants

Virginia Tech is going to be playing Air Force at the "Diamond Walnut San Francisco Bowl" in San Francisco. What the hell? When I've become independently wealthy from the ad revenues on this site, I'm going to host the URI! Bowl at some sufficiently apropos location, like BU or the University of Rhode Island.

There was a good steel drum concert last night. If you missed it, you undoubtably missed the last opportunity to instill hope in your drab, wretched life. 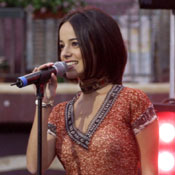 For those jaded souls who aren't already shocked and awed about my recent listening choices, here's another. I've recently been listening to the music of the French pop star, Alizée. Despite its sometimes annoying tendency to double as dance music, europop is fun to listen to because it's patently harmless, upbeat, and easy on the ears.

Alizée arrived on the scene three years ago and easily has a better voice than any Britney Spears clone the US recording industry could produce. Plus, the lyrics of her songs have a poetic, almost campy, flavour to them which reminds me a lot of music from the 80s.

I've included a sample clip and lyrics from the song, À Contre Courant, in case you want to try something new. If you like what you hear, let me know and I can recommend some other good songs. If you hate it, post a memorable comment on today's news post and get a laugh out of it.

"Rutter is the Mozart of banality." - Finicky

Police impersonator pulls over a trooper

the best update idea I ever done stole

The pen is mightier than the sword

One passenger rolled down his window, hollered obscenities at Linn and hurled a half-full can of soda before he realized Linn was a trooper.

What are your pet peeves today? 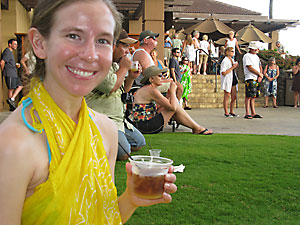 Our time on Kauai was split into two discrete segments: for the first four days, we stayed at a fancy resort and worked strenuously to relax on and nearby the complex. For the last ten days, we rented a car and moved to a second-floor condo in Kapa'a overlooking the tidepools, allowing us to travel around the island and experience some of the more heady excitements and hikes.

While on the resort, we had an hour-long outdoor couples massage in an airy tent on the beach, and listened to local musicians sing really bad Hawaiian music for a hula dancer while sipping free Mai Tais. When I was obviously not getting over my strep throat anytime soon, we took a local taxi-van to the nearest clinic, which was housed in a humidly-coloured building that could have been taken out of any Dharma Initiative setting in LOST. The doctor took one look at my throat, prescribed a week's worth of painkillers and antibiotics, and then tried to ply me for government secrets.

On our last day, we tried out the pool, which was split by volcanic rocks into a wading pool, and lagoon, and the pool proper. There was also a twisty slide with fourteen safety rules but no lifeguard which we went down continuously until the fifty-year-old couples swimming nearby were convinced to try it out. Old guys on slides are funny. 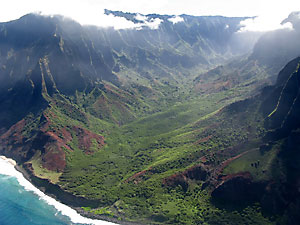 Once we had secured a convertible for the latter half, we explored every part of the island except for the farthest west points, where the sand roads would have voided our rental contract. We passed the mountain that looked like King Kong's head daily, as well as the mountain shaped like a sleeping giant that looked more like a mountain.

An activity that was definitely worth our time and money was the Kauai Helicopter Tour (through Jack Harter). We flew over and through the nooks and crannies of the island like the cast of Honey, I Shrunk the Kids in an English muffin, and did it all in a helicopter with no doors on it. The hour period is just enough time to see every part of the island while still lingering over some to take pictures of dolphins and Hawaiian ghosts. 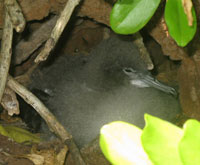 We also took a day to go snorkeling at Anini Beach, where I saw a bunch of Nemos and Dory's as well as some Jabba-resembling sea cucumbers, but I am incapable of snorkeling without getting ocean water in my pipe at least once every ten minutes.

Towards the end of the trip, we visited a wildlife refuge at Kilauea Lighthouse on the North Shore filled with the nests of wedge-tailed shearwaters and their fuzzy spawn, just inches from the travel path. We also saw several endangered monk seals basking on the rocks -- monk seals have the luxury of getting the paparazzi ropes put up around them on any beach they decide to rest on (and it's illegal to harass them), but on the flip side, they have no one to hump.

When not harassing the monk seals or making fun of the "seen-better-days" hotel that was decorated like a giant albino Oreo cookie, we went hiking. Those hikes will be the final section of my Hawaii Honeymoon write-up, so stay tuned!

To be concluded someday...

Groom Twitters from the altar

Up in arms over kangaroo chips

Bagging bucks from your recliner 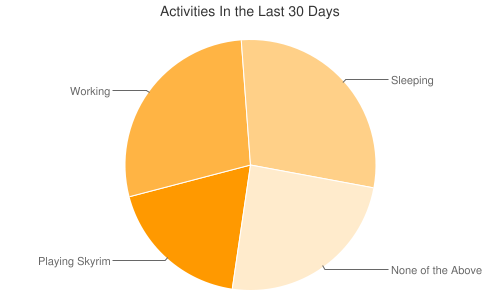 This looks like a fairly decent life-work balance to me.

Why we lost our thumb drives three years ago

On Saturday evening, we took a rare trip into DC for a combination Halloween, Oktoberfest, Thanksgiving, Christmas party known as "Sausageween". We rode the Metro in, because parking was such a pain last time, and noted that some suburban graffiti artist had tagged all of the Metro signs with cryptic messages like "Reston-Wiehle" in silver paint.

As part of the party, we walked down to the Waterfront in Southwest to see a Christmas Lights boat parade. The high point was a T-Rex, animated in lights to appear as if he were skateboarding along the river. The low point was a monochromatic sailboat with random strings of lights that resembled a corrupt graphics file from a Commodore 64 game.

On Sunday, we stayed in to avoid the wintry mix of this year's first winter event, "Edward Snowed In". We actually got a couple of good inches before everything iced over. In the evening, we ate a slow cooker corned beef and watched more of Person of Interest.

How was your snow?

I used to call this list "Top 10 Songs of the Year", until I realized that I always lagged far behind the curve in discovering new music. My relevancy seems to have improved over time -- the oldest song on this year's list is from 2009. Enjoy!

Sixteen years ago today, on December 9, 1999, it was Reading Day on the campus of Virginia Tech. This was the day just after the last day of classes, completely devoid of labs, homework, classes, or any other distractions, inserted into the calendar with the mistaken understanding that students would wisely devote it to studying for their upcoming exams. Of course this was a mistaken assumption, as most students just used the time to sleep off the effects the previous night's parties.

Although I had been at Philip's the previous night with Kelley, Shac, and Liz, I was not yet a drinker. As a result, I was up bright and early to lay claim to empty communal washing machines and work on the third movement to Jazz Suite for Brass Quintet. Midday, I headed to Squires Student Center to practice my trumpet, and then met Liz Benyo for lunch at Schultz Dining Hall, probably getting my standard fettucini alfredo and nachos with cheese.

In the evening, I went to dinner with a bunch of trumpeters and Dr. Bachelder, who was orchestrating a guest appearance / master class by trumpeter, Ryan Anthony, from Oberlin (Ryan would eventually go on to become a member of the Canadian Brass). Dr. Bachelder urged me to give him a copy of my recently finished trumpet work, Badinage. I did so, but I never got any feedback on it. For all I know, it was confiscated as being too avant-garde by airport security on Mr. Anthony's way back to Oberlin.

2016 was a more musically lean year, so I'm just listing 10 songs I enjoyed this year in alphabetical order by band rather than ranking them against each other.

On Friday afternoon, we had the first of several consultations to talk about putting a screened porch in our backyard next spring. We then put up the outdoor Christmas lights with Maia, who greatly enjoyed the deer.

On Saturday, Rebecca taught a round of anatomy to prospective yoga teachers. Afterwards, I brought Maia to the studio for a trial run of Rebecca's first "Little Yogis" class. Maia was super excited for the first 10 minutes, but then spent the rest of the class sitting in the lobby with me rolling around on the floor. We followed up with dinner at Bungalow Lakehouse, where I had a very satisfying prime rib and baked potato.

On Sunday, we had another porch consultation and a dinner of shrimp alfredo with the Jacksons. Tobias is already 7 months old!

I also got up each night at midnight for Advent of Code! 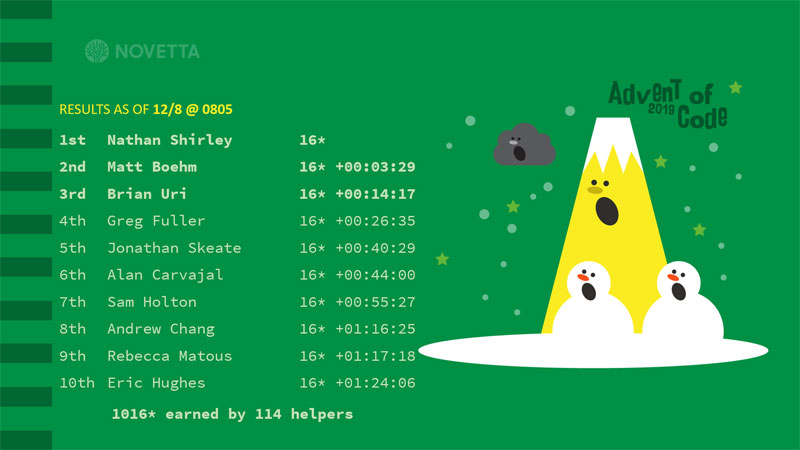 As an update to my last attempt, here are the years of my life with summary labels.

The value of labels is twofold: 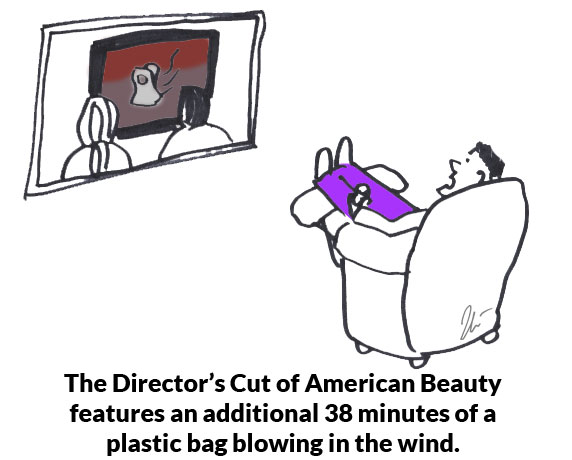 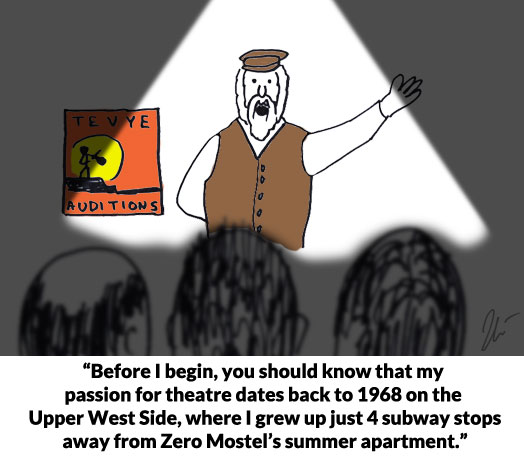 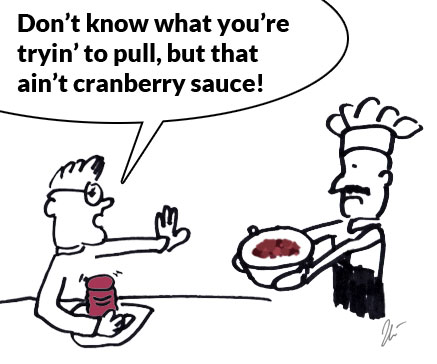