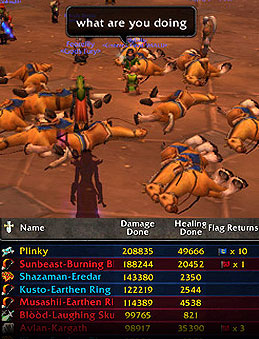 Between 2004 and 2011, I played World of Warcraft off and on for nearly five years. A badge that could be worn with either honor or shame, or an awkward marble cake swirl of both, I probably devoted more time to playing this game than I did to getting through grad school, practicing my trumpet, or wooing potential wives combined. I always had a great time, but eventually reached the point where all of the fun had been squeezed out of it, crushed like grapes at a winery with a costly monthly fee.

It's from this perspective that I picked up Guild Wars 2 last week, since every reviewer was messianically proclaiming that it was like WoW, but with Higgs bosons and chocolate chips mixed in. It was definitely an impulse purchase -- the last game I played was Diablo 3, and like above-ground pools, two months is the maximum amount of time you can picture yourself having fun playing D3.

Coming from WoW, GW2 is more evolution than revolution. I've liked many aspects of the game so far: 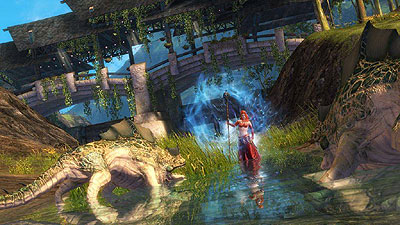 After about ten hours of playtime, however, the game still hasn't hooked me. The environment is very pretty, but somehow manages to feel sterile and obligatory at the same time. The biggest flaw so far is that the game doesn't do a good job of helping you manage the chaos. The user interface is great at effectively enabling complexity, but the game offers very little in the way of tutorials or a deeper understanding of the underlying systems beyond tool tips.

As an example, combat skills unlock as you level up, and it was easy enough to use these skills in a logical way, but it wasn't until I scoured many third-party forums and wikis that I realized that the obvious way isn't necessarily the correct way. The official manual and wiki are great as reference material, but awful for understanding, strategy, or depth. I think this is even worse for people who have played this type of game before and show up with all sorts of MMO bad habits. Sure, you can continue playing the way you always have, but you won't last long, and the game never lets you know that there might be another way to play. If WoW was your hammer, you're going to jump into GW2 looking for people to nail, and other analogies that don't quite translate.

The social aspect is flimsy too. Regardless of how many retarded pandas and microtransactions are added to WoW every iteration, it was always friendly and familiar (like that Cracker Barrel on I-81) because I had years to meet people and establish friendships. Unless your guild moves to GW2 with you, you'll be back to square one on meeting new players. This isn't helped by the questing structure, which emphasizes wandering around until something happens (also known as the "any given Friday night in my high school years" approach to questing). Because it's so easy to collaborate on these chaotic random events without any grouping or strategy, each one felt like a big crowd of solo players rather than a community.

Right now, Guild Wars 2 is a solid B- in my book of reviews. It's no cure for cancer, but it's not half bad either. The game is not immediately accessible or captivating, but does enough stuff right that I'm willing give it some more time to win me over. Torchlight 2 comes out next Friday -- that will be the defacto deadline for convincing me to keep playing!