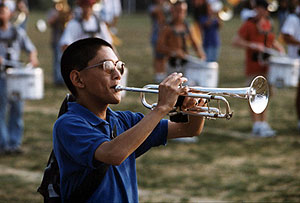 September 26, 1998 was a Saturday in my third year at Virginia Tech. I was living with the messiest of my college roommates, Nathan Egge, in East AJ and regularly wore a hand-me-down Members Only jacket to embellish my intentional wardrobe of clothing that didn't quite fit.

This Saturday was Band Parents Day, which meant that my parents were in town to watch the band spell DAD and WOW on the field, and my dad was tailing everyone in my band rank, trying to get them to look at him for picture-taking purposes (candid shots were rarely a part of his photographic palette). 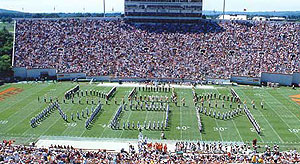 The VT football team was doing rather well, with Al Clark leading them to a 27-7 victory over Pitt, but I cared about football only slightly more than I cared about the Multivariable Calculus class I was apparently enrolled in but had attended only twice since the start of the year. I would ultimately go on to earn a C for this negative quantity of effort, and have never used my multivar skills in the real world since then.

I didn't have to worry about being embarassed by my parents after the game, since they tended to leave Blacksburg without a word sometime after halftime, to beat the inevitable traffic back to I-81 (in the days before Blacksburg had its own super-highways enveloping its campus like a very rural Mario Kart track). Instead, I was invited over to Dave McGarry's townhouse for a post-game barbeque with his brother, Marc. I assume that Doobie was there too, but cannot recall for sure. All I remember of the evening was that Dave-o had recently discovered that putting CDs in the microwave made cool patterns (accompanied by a demo), and that he and his brother had decided that "diadem" was a cool word, and they were going to put up a website at diadems.com. Apparently, that plan never came to fruition.