The fact that Dishonored tops so many 2012 Game of the Year lists leaves me mildly incredulous, not unlike the year that Lost in Translation was up for Best Picture. The game is not bad by any stretch of the definition: I appreciate that it's not an assembly line sequel, and that it squeezes five pounds of potential into a three pound bag. Ultimately though, it's just kind of boring.

Dishonored is a revival of the first-person stealth genre, in which you spend 10 minutes hiding behind a crate waiting for a guard to change positions, only to reload your last save game when another guard somehow manages to see you through an opaque brick wall. The mechanics have improved over the past fourteen years, and this game is much more forgiving in many regards. Apparently no one in the city of Dunwall ever looks up higher than their top shelf.

The graphics and soundtrack are unmemorable, but good enough to support the shell of a story, which is also unmemorable. You play the game as the Empress' bodyguard, falsely accused of murder, and set loose in a city that's half Industrial Revolution and half zombie movie. You are a silent protagonist, which might have saved ten bucks on voiceovers, but really just makes you seem kind of douchey. It feels like there are scads of backstory and history just underneath the surface, but the plot never does a good job of tying it all together, or making you care. The tone of the (somewhat abrupt) ending also changes based upon the choices you make during the game, but the unforgivably large number of unskippable cutscenes and dialogue options deterred me from a second playthrough almost immediately. Sure, you can skip every scene featuring zombie James Franco, but you still have to listen to the shopkeeper's 15 second dialog every time you want to buy something. 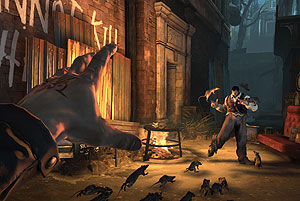 The game's biggest selling point is its open-ended gameplay mechanic. As you stalk through the city, hellbent on either revenge or justice, there are always multiple solutions to every situation, from lethal to nonlethal, and from stealthy to guns blazing. If a door is guarded by a swarthy thug, you might scale the rooftops to get around it. Or, throw a bottle down the alley to distract him. Or, sneak up behind him and knock him out. Or, sneak up behind him and slit his throat. Or, shoot him with a sleep-laced crossbow bolt. Or, use your loud pistol and get through before reinforcements arrive. Or, (WAIT, THERE'S MORE) summon a swarm of magical rats to devour him (!). Or, possess a rat and squeak around him. (Or, type IDDQD and walk through the nearest wall). The sheer number of options available leads to indecision apathy and reduces the excitement of the choice you finally do make -- I don't even do well at restaurants where the menu is more than three pages long.

As you play, you'll find that certain solutions are always the easiest and have the least amount of risk, partly because the enemies are dumb as bricks and have multiple astigmatisms, and partly because magic makes everything easier (unless you're Harry Potter and in search of an arbitrary number of magical doohickeys to stretch out your storyline into a seventh book). There's never a good reason to try the harder alternatives unless you're playing the game solely to challenge yourself, so I often felt like I was playing by rote. It doesn't help that upgrades to your weapons and skills make you nearly invincible long before the final mission.

Dishonored as a sandbox framework for emergent gaming is much better than Dishonored as a game. There are all sorts of informal challenges you can restrict yourself with (speed runs, never using magic, never being detected, or never killing anyone are popular choices). While I didn't enjoy this game as much as I'd hoped, you might enjoy it if you treat it more like a steampunk Grand Theft Auto.