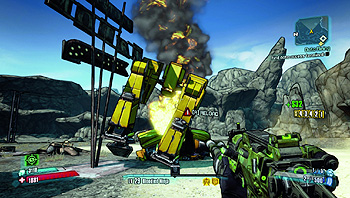 Borderlands 2 is a hybrid game which manages to successfully inject action RPG elements and loot-whoring into a first-person shooter playstyle. I picked up the PC version in a half-price sale over Thanksgiving without any previous knowledge of its prequel or what it was about. As of last night, I had devoted about 90 hours to this game (which is more than Terraria but less than Skyrim) and have not lost interest.

There are four classes to start with, each with three possible skill trees (similar to WoW), and points are assigned in the "skill shelf" way of Torchlight 2 (where you need 5 points to pick a skill on the next level, but they can be from any particular skill on the previous tier). Each class has a special action skill that defines their playstyle, such as stealth, deploying a turret, or firing two guns at the same time.

The loot addiction part of the game comes in the form of millions of guns -- different types from sniper rifles to pistols, different manufacturers who add special features to their guns, and various trade-offs between accuracy, reload time, and magazine size. Choosing the best gun is more about trying them all out and finding one that fits your playstyle, rather than taking the one with the biggest damage number.

To be honest, Borderlands 2 didn't immediately grab me in the first couple hours of play. The interface is very console-centric and gets in the way of looting or comparing guns, and loot is scattered across the world in billions of little boxes requiring you to Open, then Pick Up items. Your playthrough will be greatly rewarded if you immediately remap the "Use" action to a spare mouse button rather than the default keyboard key, because you'll be pressing that button more than John Locke.

The other irritant is the breadth of the massive world. There's a fair amount of traveling and backtracking, and not enough secrets to make completionist exploring worthwhile (You will also outlevel some content if you try). If you can get in the mindset where you don't need to search every single locker or visit every single corner of the map, the game becomes much more fun and, eventually, addicting.

Where Borderlands 2 really shines is in its setting and style. The writing and voice-acting are top-notch, and it's one of the few recent games to really do humour well (reminding me sometimes of Portal and Portal 2). The plot is just slightly better than average, but the dialogue and characterizations are worth the price of admission. Here's a representative clip from fairly early on in the game.