On January 16, 2002, I had just started my second semester at FSU, and spent much of my time noting how disorganized our Pedagogy of Music Theory II class was, especially in comparison to the first semester. I was in the middle of writing the second movement to my string quartet, Outlooks, called "The Optimist". I had plenty of free time, because my graduate assistantship involved proctoring an electroacoustic music lab that was never actually built because of 9/11 budget cuts. Meanwhile, Kathy was noticing a scope increase in her own assistantship: 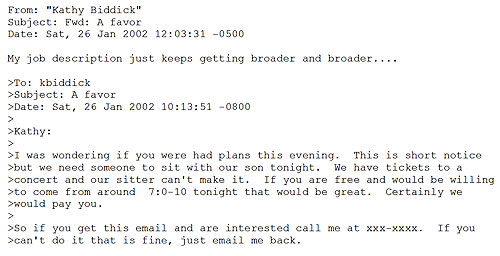 When not complaining about Pedagogy class, where we did undergraduate ear training exercises and ultimately learned that "teachers teach the way they were taught", I was playing Return to Wolfenstein and Wizardry 8. The latter was a game so boring that the only thing I can remember about it eleven years later is that I could replace the game's MP3 soundtrack with my own MP3s. I was also listening to a lot of Dave Matthews, especially that one song where he gets Tourette's and starts repeating CAT! over and over. Incidentally, that would be a great soundtrack for a cat video.

In the evening on the 16th, I met Kathy at school and we went to Mike's Florida Towers apartment to measure his living room. He then bought a pool table (to arrive in two weeks) which was easily the most incongruous piece of furniture you could find in a tiny third-floor apartment. Afterwards, we sat around the apartment indulging in the latest Mike fad, which was painting. I still have the complete set of awful paintings from those years saved on my hard drive, but none of them have dates.

Several of my recent Memory Day posts have been from the Florida era, mainly because most of the Virginia Tech years have blurred together like an Instagrammed JPEG at 30% compression. The Florida years are on the cusp of the memory waterfall, so I figured it would be good to get them down before they are lost forever.