To celebrate the upcoming nuptials of Evil Mike, a subset of his groomsmen threw him in the trunk on Saturday and drove him to MagFest at the National Harbor. Contrary to his initial guess, "Mag" stands for "Music and Gaming" -- we were not taking him to a magazine show.

MagFest was apparently a much bigger deal than I thought it was, with teeming masses of unwashed gamers flowing viscously through the massive hangar underneath the Gaylord Hotel. The convention center was packed with free arcade machines, consoles of every era, PCs, and even a wall full of Settlers of Catan and other nerd games with plenty of tabletop space available. This was my first "CON" experience outside of pictures on the Internet, and it was about what I expected. 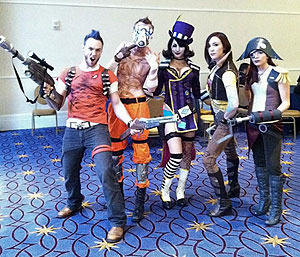 The only differences where that there were more women (about 20% of the attendees) and fewer costumes (only about 10% of the attendees). I saw the expected assortment of Zeldas and Marios, a bunch of anime characters that may have been popular (but I wouldn't know about because anime is lame), and a pretty cool group effort of the characters from Borderlands.

After dinner at a pub that happened to have run out of every single lamb dish before our arrival, we dove back into the fray to hear some loud metal bands play video game music and some Skrillex clones dropping some beats through the synthesizer chips from the original Game Boy. We also spied on the LARP room to see if anyone was throwing Lightning Bolts, but it was unfortunately empty.

Postscript: The Gaylord Hotel is a ridiculous behemoth, but I really hope that those inner-courtyard-facing windows are soundproofed, especially after 11 PM when that trumpet player dressed as Link was playing the first 8 bars of the Zelda theme over and over again.

Post-Postscript: On the way home, I was pulled over on the Toll Road for going 65. Hide your wife and kids, lest I recklessly hit them. Luckily, it was a warning situation only.