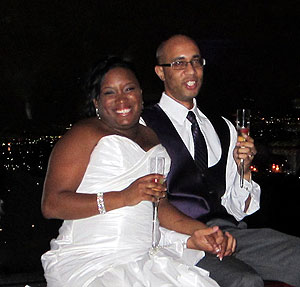 The weekend started off on Friday with unsustainable excitement (not unlike the Matrix trilogy), front-loaded with the wedding of Married Evil Mike and Taje in Arlington. It coincided with an overhyped snow event that saw less than an inch of snow fall on the area and forced NOVA Community College to close early.

Being in the wedding, I was unable to take my usual assortment of wedding photos, since there was no place to stick my camera that was not inappropriate. However, Rebecca subbed in and got some nice shots (most of which are on Facebook at the moment) while I did wedding party stuff and ate dinner from the paella station.

On Saturday, I returned the rental suit and its five thousand accessories to Mens Wearhouse and then restocked the fridge, which had gotten dangerously low on Coke Zero and tater tots. I then spent the rest of the day playing Dishonored, which gets a weak thumbs up (review on Thursday). We ate steaks on Saturday night and continued the David Fincher odyssey with The Game, which I had seen years ago and Rebecca didn't particularly care for.

On Sunday, I practiced my 7th chord fingerings on the bass, and started the FX show, Justified. Dinner was gnocchi from Cantina d'Italia in Herndon -- we've decided that it's easily the most delicious item you can order for a reasonable cost.

Tell me something embarassing about your own weekend!