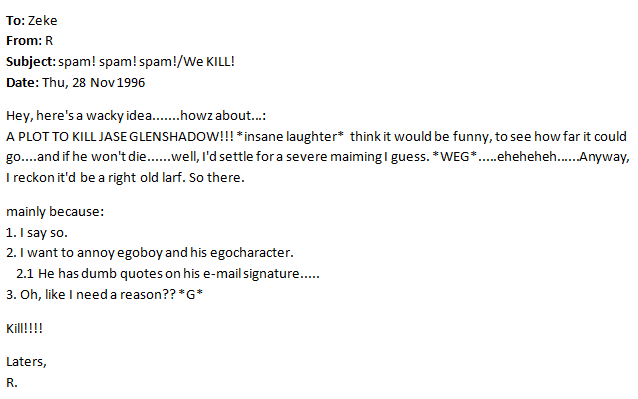 Sixteen years ago today, I was a freshman in college and heavily into online chatroom roleplaying. I frequented the "Inn of the Weary Traveler" on the Webchat Broadcasting System. A competing chatroom that got more publicity was "Glenshadow's Tavern", and this guy, _R_, was not a fan. In the email, he is proposing that the characters in IWT "travel" to the tavern and "kill" Jase, figuring that Jase is so invested in his character that he would refuse to die, thus being labeled a "zippy" by all of the serious roleplayers. I remember a time when my emails were dependent on *insert action or acronym here* for comprehension. Now, I can't even try to put asterisks in an email without cringing.

Ten years ago today, I was corresponding with an Aussie named Rachel, who I met while writing Warcraft 3 battle reports as ~CattleBruiser~. Two years later, we would still be in touch and she would go on to annoy Beavis in the comments section of the URI! Zone. I have not heard from her since 2010. 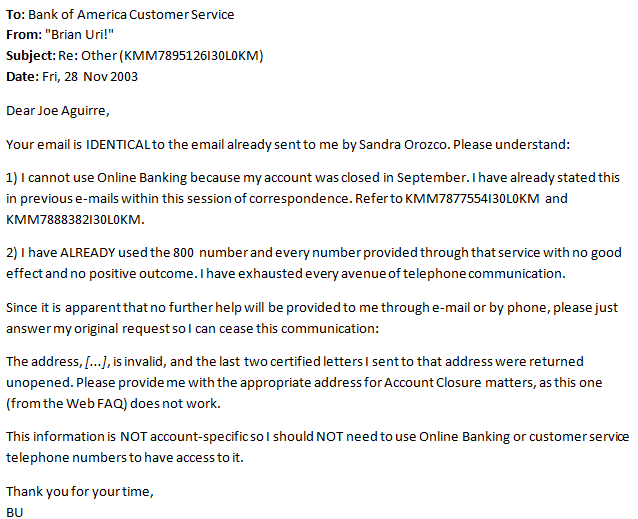 Nine years ago today, I had already spent five months bickering with Bank of America to recover $700 from the account I closed when I moved out of Florida. They chose to send the check to my old address and then gave me the runaround for another year (telling me that they could only talk to me through Online Banking, which could only be used with an open account). Life lessons learned: Manually empty the account out before closing it, and Bank of America can go blow themselves. 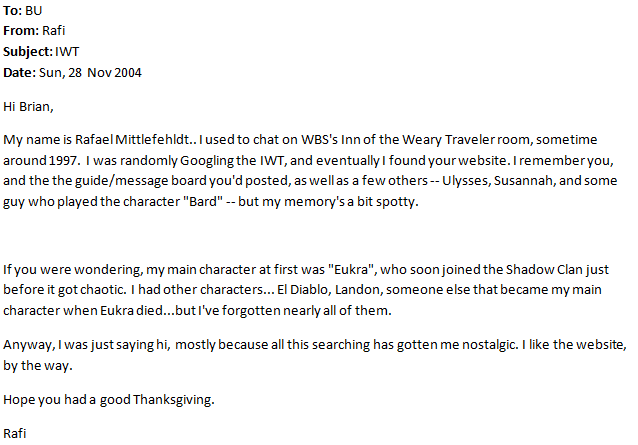 Eight years ago today, I heard from someone in my IWT days from out of the blue (IWT had died five years earlier). Although I barely remembered him at all, it was nice to know that he had gone on to being a functional member of society. More recently, I heard back from another friend who now works as a pharmacist, has two kids, and sells Apaloosa horses in Texas.