The Capital Beltway's new lanes have been open to the public for just a few days, but it's already time for a bit of a makeover. A spate of accidents at the entrance to the northbound 495 express lanes, all stemming from last-minute maneuvers to avoid the new lanes, has transportation authorities scrambling to make changes.

A spokesman for VDOT argued that Northern Virginian drivers should be used to constant lane changes by now. "While the HOT lanes were under construction, we played a game where we shifted the southbound 495 lanes to the right an extra foot every day. No one complained until they realized that they were driving through Aldie."

The high-occupancy toll lanes represent a new way to manage traffic and build new highways at a time of increasing congestion and stagnant transportation funding. Tolls rise to control demand for the lanes and ensure a predictable trip over the 14-mile route.

A recent transportation study showed that drivers were overwhelmingly in favour of what is essentially a Tax on the Entitled Class and People Too Lazy to Wake Up Early Like the Rest of Us. Additionally, 100% of those polled did not identify themselves as part of this group. 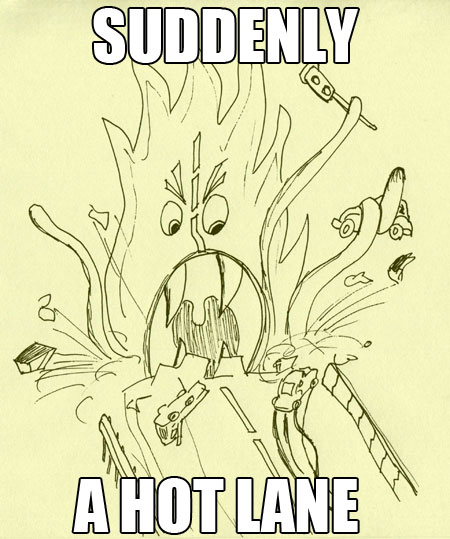 On Sunday night, electronic signs were changed to warn drivers about the new pattern and extra colored reflectors were added to the barriers that separate the high-occupancy toll lanes from the regular lanes. Even after the changes, two crashes occurred Monday morning, raising the three-day total to six. So on Tuesday morning, drivers will wake up to newly extended lane markings intended to minimize unsafe lane changes.

Workers have also installed warning signs on the Blue Line Metro to alert commuters parked in Springfield, and pinned notes to the shirts of elementary school children who will be driving by 2020. AAA spokesman, Lon Anderson, criticized the additional signs. "You would have to be completely oblivious to miss the current batch of signs. If we erect too many warnings, we're going to have a Williamsburg problem, where every road purports to lead to Busch Gardens, but none of them actually do."

New legislation is also expected from the Virginia Assembly, requesting that the HOT lanes wear bright red vests, although Governor McDonnell stopped short of endorsing the construction of a new HOT Lane Lane to keep the HOT Lane safely separated from traffic.

Every crash has occurred near the entrance to the northbound express lanes between the Springfield interchange and Braddock Road on the inner loop of the Capital Beltway.

In all likelihood, drivers near Springfield are still gun shy from the introduction of the Mixing Bowl five years ago. Virginia State Police still found this surprising, since they had deployed their patrols near the American Legion Bridge where all of the Maryland drivers enter the state.

The new lanes opened Saturday at 2 a.m. after weeks of media attention and a ribbon-cutting and balloon drop presided over by Gov. Robert F. McDonnell (R).

The Governor's office downplayed any connection between the increase in accidents and the four million balloons littering the highway.

The first crash came just before 7 a.m. Saturday. A 19-year-old driver approaching the express lane entrance swerved to the right to avoid it, overcorrected to the left and hit the Jersey wall. [...] An hour later, just as the first crash was being cleared from the road, two vehicles caught in the backup collided. The third accident came shortly after 2:15 p.m Saturday. A driver trying to avoid the lanes swerved, and the car spun out and came to a stop in the roadway. The fourth incident occurred on Sunday at 8:04 a.m., when another vehicle trying to avoid the toll swerved, spun and struck the Jersey wall.

In response to this surge in accidents, Urban Dictionary now defines "strike the Jersey wall" as "blowing a lane change out of proportion because you're not paying attention to the road". The previous definition was "being passed over for promotion because you come from New Jersey".