I wrote Scarabus in the spring semester of my third year of undergrad, solely because of an offhand remark from a piano player.

All music majors at Virginia Tech had to perform once a semester at "Convocation", a weekly gathering with mandatory attendance (but no mandatory wakefulness). Because a composer is the final word in how to interpret his own works, I would sometimes play my own music on the trumpet: an end-run around having to perform the same Persichetti garbage as every trumpeter for ego-filled comparison. The first work I performed was the first movement of The Hero, a wind band trumpet concerto that I squished into a piano accompaniment without much skill or foresight.

As we came off the stage from the performance, another accompanist who did not know that I was the composer (the infamous Jimmy B.) commiserated with my accompanist, "That sounded like one of those orchestral transcriptions that no one ever wants to get stuck with!" He was completely right, and I decided that it was time to learn how to score for piano. I started by transcribing multiple existing accompaniments, such as the Kennan Trumpet Sonata, into MIDI to hear and feel how the lines flowed technically. As a result, impressions of Kennan harmonies ended up prominently in Scarabus. 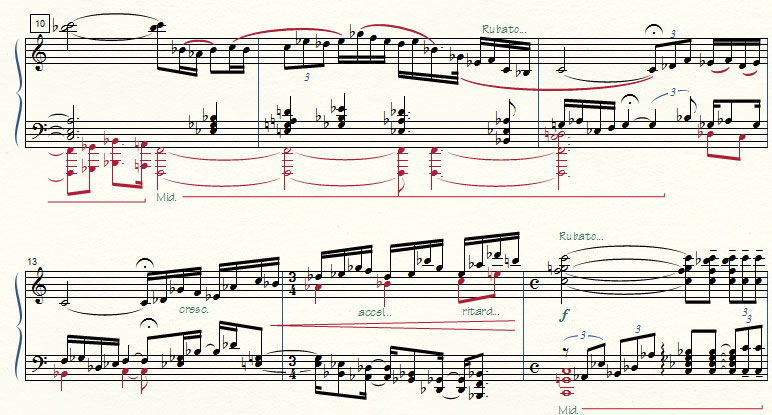 Scarabus was a through-composed trumpet work in four sections. I had a feeling and style in mind, but no overarching thematic urges. I just wrote until I got bored and then switched styles. Through this piece, I practiced such valuable new techniques as "the trumpeter doesn't have to be playing the whole time", and "pianists like octave arpeggios".

Through this self-study, the difficulty of my piano accompaniments dropped from "digitally impossible" in 1998, to "unnecessarily impudent" by the time that Rob Kelley accompanied me at FSU in 2002.