Music Tuesday: Anything Can Be Pep Band Music

When I was first getting started in composing in 1995, my bread and butter was pep band music. Each arrangement was fairly short, subtlety was less important than projection, and the style was usually more fun for high school kids to get into than wind band stuff.

This was especially noticeable at T.C. Williams in the mid 90s, as we were something of a special needs marching band. In the years before Bob Zazzara flooded the group with enthusiasm and its own zip code, the T.C. Marching Titans rarely peaked at 50 players, and couldn't afford much in the way of music (we had to wait for the quarter notes to go on sale for a dime). In this environment, where we alternated between a song called "Bread Man" and "The Wanderer" over and over, I thought it would be really neat to apply my newfound, inept skills to donate some additional music to the playbook. Plus, band girls like composers, right?

As a budding musician who expected to make millions selling his own sheet music, I wanted to do things the right way, and started writing to all sorts of music publishers for permission to arrange their music. (This was before I learned in college that a true arranger just writes songs in nearly the same style as the desired song and calls it artistic license). For the most part, music publishers treated me like any other arranger and sent me a form letter and a request for $50, which is about what the band as a whole spent on our trip to the Peach Bowl. I actually ended up paying for rights to the Darth Vader Theme and Cantina Band with Warner Brothers, but passed on most of the other songs. It didn't seem worth it to pay for the privilege of writing what could possibly be the most inexperienced arrangement of Louie Louie ever heard.

I also sent a similar letter to Nathan Wang, composer of the soundtrack to Return to Zork, a cutting-edge computer game that featured really bad actors in full-motion video, and a novel soundtrack that was actual recorded music on the CD, rather than tinny MIDI music. It was a long shot, and I never did hear back before pep band season ended.

However, the following Spring, I received this letter from Michael Schwartz at Activision: 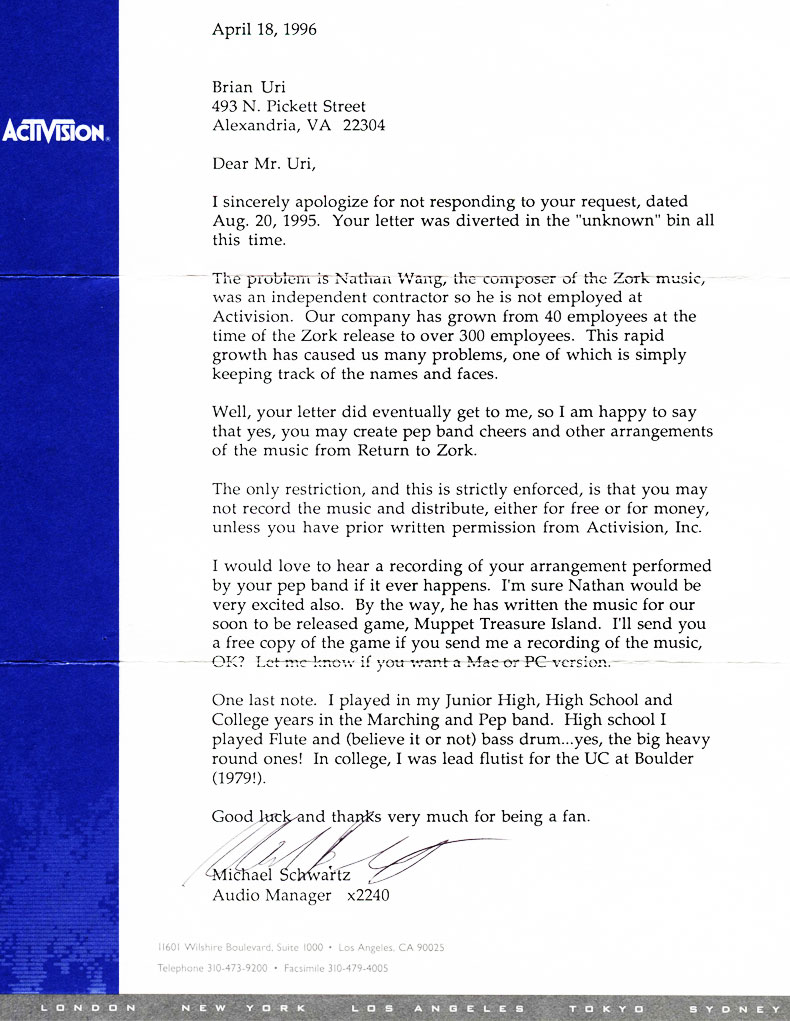 I eventually did go on to arrange a couple fanfares and short cheers based on the music from Return to Zork, for completionist's sake, although they never ended up getting performed. Here's one of those arrangements in MIDI:

Still, I always thought it was very cool that someone took the time out of their day to reply to a random high school kid's letter and give them permission, for free, to try their hand at music arranging.

I would also hear from Michael a couple years later -- Activision needed a school band to do some kind of recording and he wanted to know if T.C. would be interested. Knowing that this would end horribly for all involved, I politely declined.