keeping you emotionally, if not physically, warm today 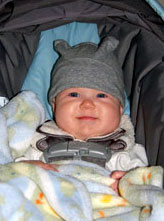 ♠ In all the hubbub of the Month of Thanksgivings, I forgot to mention that Paige, Male-Paige, and Mini-Paige came to visit me while in town from Houston last week. I didn't get a chance to take any pictures, so I just stole one off of her blog. To celebrate their return from Spain and the baby in a proper fashion, I heated up some leftover ham from Thanksgiving #2 and served it with all the fixin's.

♠ Ham was the meal of choice for the middle dinner to break up the neverending parade of tasteless turkeys. Maybe next year I'll nix turkey completely and come up with a more tasty Thanksgiving tradition. Wouldn't the Pilgrims have eaten buffalo wings if they could make them? As a Hokie, should I even be eating turkey anyhow?

♠ Speaking of Hokies, you know that technology has finally caught up to real life when Dave McKee cancels Marching Virginians practice via the Status Update feature of Facebook. In my day we actually had to send out a really slow mass-email to achieve the same effect. 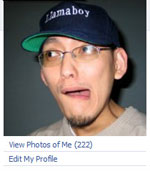 ♠ There are now 222 photos of me on Facebook, which is probably equal to Volume I of XC from my childhood albums. After high school, I was rarely in any pictures since I was usually the one taking them (and this will also help to set the stage for my eventual disappearance into a yellow ops division of the CIA).

♠ My plans for the weekend are actually quite relaxing. Other than an Indian Food Night at Shakir's where I will bring something less spicy and safer for the poophole than Indian Food, I'll probably be staying in for most of the weekend, catching up on my pleasure reading, my Wiki work, and my News posts. December is easily the most structured month of my website updates, since you can expect such yearly features as the Top Twelve, the Pictures of the Year, and the Museday Finale to make an appearance.

♠ Have a great weekend! Don't forget tovote for your favourite Museday excerpt by tonight!