The 2008 Sterling Poker Tournament came to a close this weekend with the fame and glory of first place going to Kristy Wilmer, a dark horse winner who consistently came in second place in all two of the games she played (two is the minimum you must play in to have your score count). Kristy also played a single game in 2007 (where she came in 2nd place as well), so SAT pattern recognition would dictate that she'll be at 3 games in 2009. As a reward for winning this year, Kristy gets bragging rights over her husband, Jack, who tied with Chris (another "husband who lost to his wife") for 6th place.

Here are the scores (not including players who only played in a single game this year):

In second place, Ben turned poker into a lucrative side job and was one of only two people to turn a profit. Poker is SERIOUS BIDNESS when Ben plays. He is also the only husband whose poker skills did not atrophy after marriage: Third Place Larry started strong with a first place win on 2/23, got married on 3/4, and then tanked three months later. In fourth place, Mike C. (of Mike and Chompy) was sporadically decent, obviously confused by the switch between Florida and Virginia rules and weighed down by the grease from all the Chick-fila he brought to each game.

Kathy came in fifth and attended as many games as possible for chocolate pie. Mike J. (Jaood) took 7th place and although he started strong, that Power-10 in the middle of the race obliterated him. However, he ended up about $50 richer than he started. Ninth place was Rebecca, whose poker dreams were hindered by a month long trip to Guatemala (the numbers on the cards are all way different in Spanish and she had to relearn it all back in the States). Finally, Anna got the highest possible place (10)! Apparently, playing poker with babies is like subtracting one face card from each hand.

Missing this year from the games were Jason and Rosie, who were probably tired of losing all the time in 2007 and turned their attentions to the safer investment of making babies to raise for manual labour. 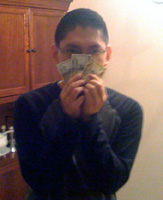 As for me, I was consistently weak this year, not playing well with others, and showing no attempt to learn. I spent $130 (not including drinks, pies, eclairs, and freaking diamond rings) and only won $60 back -- as the old maxim goes, "There is no BU in winner, but there's definitely one in BUY-IN". I did manage to snag first place in the final game, but only because I was dealt a flush when Chris went all in.

My next goal is to parlay this win into another success at the Work Poker Tournament this Thursday night. Since I came in dead last out of about 50 people last year, there's nowhere to go but up!

No birthdays for Hitler