Booty (born Athena) was only fourteen weeks old when I adopted her from a rescue agency in Tallahassee in March 2003. Mike (of Mike and Chompy) was in attendance at Petsmart when I picked her out of the cage full of ugly kitties and did the obligatory lying to the stereotypical rescue worker who believed that all cats needed someone to be home 24 hours a day and have access to fresh salmon and litter boxes full of shredded money. I took her back to my two-room apartment in Parkwood and she promptly squeezed through a tiny slot under my cupboards where I could see her but not reach her.

She finally came out six hours later when I tempted her with food, after which I sealed up every crack in the kitchen with two-by-fours and duct tape. It only took a couple days to get acclimated, and soon she was tearing around the tiny rooms like an ADD three-year-old living in a closet. Her favourite toys from this era were empty paper towel rolls and bags from my Tuesday trips to Wal-mart, and one night, she demolished a full bag of bagels I'd left out on the counter. She was also a lonely kitty, and would pee on some part of the room every time I left for classes. Once, I had been gone for less than a minute to check on the laundry to find a nice wet stain right next to the front door. 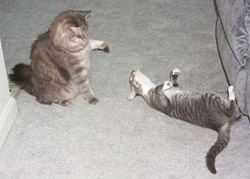 After finishing up my Master's at FSU, Booty and I took a road trip back to Virginia where we moved into a Centreville apartment with Anna and Kitty. Kitty is also a peecat, and I was worried that I would have to open a corporate account with Nature's Miracle, but fortunately the introduction of a new cat ended Booty's rain of terror, and she's never peed inappropriately since. Kitty and Booty's favourite pastime was wrestling, and I've got enough footage in my archive to create a full-length wrestling epic if some indy director ever wants to turn it into a movie. 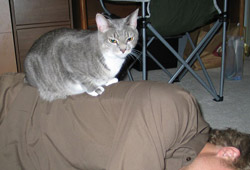 One thing Booty learned from Kitty was how to be fat -- namely, how to eat alot, how to stop exercising, and how to convert complex carbohydrates and proteins into blubber. Despite looking permanemently pregnant, she hit it off with Anna's future husband, Ben, often seducing him after dinner.

In 2004, I bought the house in Sterling and moved up north. With Anna's wedding imminent, we decided to purchase two MORE cats so that Kitty and Booty would each have a friend when it came time to split them up. Amber and Sydney arrived in March of 2005, and when it came time to choose, Booty greatly preferred Amber over Sydney (she said she was irritated by Sydney's howl, and felt that two food-oriented cats would not get along well in the same house).

Although they weren't instant friends, Booty and Amber now get along pretty well, since Booty can kick Amber's ass, and Amber can squeeze into safety spots that are too narrow for Booty. Amber's story, however, will be saved for another day!

Contestants Bailed Out Of Truck After 55 Days

Man with no arms caught driving