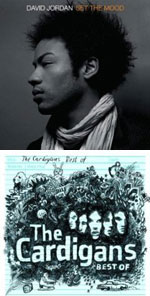 Set the Mood, David Jordan:
I purchased this import album based on the strength of the UK hit single, "Sun Goes Down". David Jordan does have talent that goes beyond looking like an angsty Wallace Fennell, and the songs on the CD are catchy, if more at home on an episode of American Idol than anywhere else. The tunes are forgettable but fun, and the only noticeable shortcoming is when Jordan tries to sing below his vocal range and ends up sounding like a character from Sesame Street.
Final Grade: B-


Best Of, The Cardigans:
All too often, greatest hit compilations are done incredibly poorly. However, this Cardigans compilation is perfect for any Cardigans fan or someone interested in their work. The CD is 80 minutes long (something I haven't seen in at least ten years) and comes with interesting liner notes from the band on each of the selected tracks. A few highlights are chosen from each of their six albums, from the harmless syrup of Emmerdale, to their obsession with electronica on Gran Tourismo, through their "country" album Long Gone Before Daylight, and beyond. The CD also contains two unreleased tracks, one of them a duet with Tom Jones, which really only serves to highlight how much Nina Perrson's voice has aged in ten years. You can hear the difference by comparing the first and last example track below.
Final Grade: A 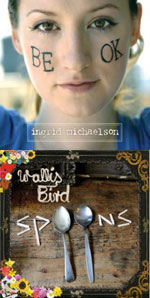 BE OK, Ingrid Michaelson:
Although this is a new album, it's only 30 minutes long and contains only 7 new songs out of 11 tracks (it can be bought for $9, a portion of which is donated to a cancer organization). Only a couple of the new songs are notable -- the rest are charming and fun but a little too "indie acoustic" for my tastes. Michaelson also covers two existing songs and I skip them both every time they come around (her interpretation of Somewhere Over the Rainbow is especially cringeworthy). So, the CD is a mixed bag -- It's a cheap investment for a good cause, and Ingrid's singing is always adorable, but it's no Drastic Fantastic.
Final Grade: B-


Spoons, Wallis Bird:
Wallis Bird strikes me as something of an Irish KT Tunstall. Her songs are well-composed and have a consistent sound and her voice is strong in both rhythmic charts and ballads. I especially like her use of shifting meters. The only downside to this CD is the last song, which is annoying by the nature of it being seven minutes long. This is also the reason I finally deleted Kashmir from my MP3 playlist last month.
Final Grade: A-

Thief gets his own billboard