propogating my madcap descent into irrelevance

♣ I write this on Thursday night, having just returned from a high stakes poker game at work in which I came in 21 of 24. For those readers who spent the majority of early algebra class staring at that one girl who seemed to hit puberty eight months before anyone else, this is equivalent to 7 out of 8, which is actually slightly better than I do in home games. In those games, I am quite familiar with the term "dead last". 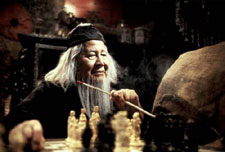 ♣ Most of my losses can be attributed to the level that I play the games at -- I don't consider all the intangibles of poker when playing a hand, like which cards have already been seen, whether I have an 88.88 chance of getting card X, or what the rule books say you should do when you open with a pair. I'll play with a modicum of strategy, but not as zealously as most players. It's the same with chess -- I'm never thinking fourteen moves ahead, and if I make a good move, chances are solid that I didn't realize how good it was until the other player nods magnamoniously and explains in depth what the Latin name for that gambit is.

♣ On a note of self-aggrandizement to counter my lack of poker skills, my game Augmented Fourth somehow made it's way onto a list of Suggested Works of Modern Interactive Fiction

. Had I not licensed the game as freeware I would no doubt be a multi-millionaire by now.

♣ I've changed my mind about how I would spend my hypothetical millions. Instead of retiring to a private island somewhere, I would continue to live where I live, but without a job. Being independently wealthy but not spending it on retarded stuff would mean a permanent life without responsibility, which I would then use to do all the things I never have time to do. I could read a book every day, learn a foreign language, and play every single video game that I ever bought but never got around to beating.

♣ As you get older, the ratio of games you actually win to games you just play for a while shifts dramatically. There were games from my childhood that I knew inside and out -- I could probably recite the hint books from memory or find all the secrets as a reflex. I think the last game I actually beat was Warcraft III in 2003 and Fire Emblem in 2005, and I have a whole slew of console games at varying stages of success. It would be fun to have the time to go back and beat them all, except for the ones that suck.

♣ This weekend I am working. How about you? Is all your Christmas shopping done yet? Mine is!

♣ Have a good one! Enjoy the end of your semester if you are one of those educational clowns.

The game actually is pacifist because players lose "spirit points" every time they gun down nonbelievers rather than convert them.