At the Mercy of Fans 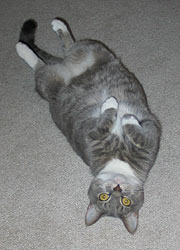 The ATI Radeon graphics cards are really solid cost-effective cards but their onboard fans are on the "py" end of crappy -- both of the Radeons I've owned since 2004 worked perfectly until the day the fan snapped off and flew through the case like a child-safe plastic throwing star. Graphics cards generate a ridiculous amount of heat, and when the computer case is kept so close to a sexy man such as myself, you really need a dependent cooling solution. Booty agrees.

I last bought a Radeon 9800Pro in April '05, and it managed to last a whole year before the fan exploded like a mosher at a Bin Laden concert. I then prolonged the life of the card for another eight months by leaving the case open and blowing a small circulator fan across all the hot bits. This worked until last month when the dial on the fan snapped off, leaving behind a plastic spindle and making the act of turning it on and off an arthritic litmus test. Realizing it was time to finally upgrade, I browsed NewEgg and found an ATI Radeon x1650pro AGP 512MB (con sizzle) for under $200 and had it delivered. 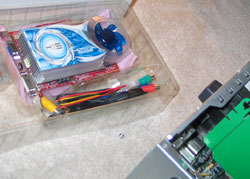 This isn't your normal off-the-shelf card -- it's made by HIS and has a gigantic after-market cooling fan attached to the card. The fan takes up an entire slot next to the card and weighs more than the card itself. It could easily double as a hair dyer for my long, lustrous hair, if I ever had occasion to have my head stuck in a computer case after a shower. Installation was a snap, and it only took a quick driver update to get things running again. Now my computer case is once again closed, cool, and quiet. 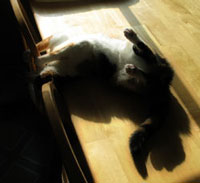 It also doesn't hurt that in a game like World of Warcraft, I can stand at the Ironforge Mailbox and get a solid 30 frames per second running at 1600x1200 with all the settings cranked up and no overclocking. Amber is very happy with my new purchase, and so am I!