For Some, Laptops Don't Compute

Administrators in the Alexandria City Public School system are starting to question whether their two-year-old program to give a laptop to every single student (and the accompanying effort to turn their high school into a wirelass* hotspot) is really worth the cost. One board member said, "I think the decision was made to bring computers into the school system before they really knew what they were going to be doing with them." I first mentioned this initiative in March when I visited with an old English teacher who hated the laptops

and was able to say so with impunity because he was retiring soon. Giving every student a laptop seems like such a bad idea and I can think of at least two reasons why the program should have never even left the gate.

Computers are a Distraction: One of the main reasons public education has even a slight resemblance to a successful venture is that the students are a captive audience. When you are forced to come to school every day, leaving your video games and puppies and collected works of Smetana at home, your distractions are really quite minimal: looking out the window, daydreaming, or the opposite sex. With so few other stimuli, it's much more likely that you'll learn something from class, even if you forcibly try to maintain your stubborn idiocy. Students will go to great lengths to avoid a productive class period and requiring them to have a laptop in the classroom is like a gift of the gods (LAPTOP OF THE GODS). 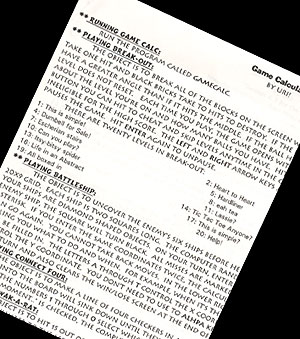 Even without the lure of the safe-filtered Internet (as if high school kids today don't know how to get around Net-Nanny), a laptop can provide hours of distraction in the classroom, from Minesweeper to sending instant messages to your cohorts. On a tangent, I recently overheard a manager tell someone, "I didn't know why he wasn't replying to my phone call, so I sent him an 'Instant Message'", and the tone of his voice clearly indicated that he was trying to be technical, to the point where you could hear the air-quotes and capital letters flying around the term like a blinking neon sign of Internet illiteracy. But, I digress.

When I was in eleventh grade, the big new requirement was to have a TI-85 graphing calculator for advanced algebra and calculus classes, because apparently it's vey hard to draw a parabola in longhand. One day, I noticed that a friend had somehow downloaded a little Pong game on his calculator, no doubt with his illicit connections to the geeks of the Thomas Jefferson High School for Science and Magnets. This inspired me so much that I took it upon myself to learn TI-85 programming inside and out. Three months of industrious work culminated in Game-Calc by URI! which featured Break-Out!, Battleship, Connect Four, and Whack-a-Rat while simultaneously taking up all the available memory that would otherwise be wasted on integrals and derivatives. This made me very popular in class, especially with all the cute field hockey girls who hated Kokonis' class and wanted something to pass the time with. However, I didn't write a single line of it at home or in my free time. Instead, I zoned out in my French 3, American Civilization, and Pre-Calculus classes, learning absolutely nothing from the teacher, and telling them all I was working on Math homework whenever they asked questions. If I had been forced to carry around a laptop instead, I probably would have ended up being the creator of Quake, or the writer of the great American-Asian novel.

Some Topics Just Don't Need a Computer: Take, for example, math. For some people, math is very difficult. Difficult enough that learning anything besides the math itself results in student overload. Yet that's exactly what happens with programs like Mathematica -- you spend so many hours with a red cup on top of your Math Emporum computer waiting for the TA to show you how to use the computer program that you never actually get around to learning the math itself. Having a requirement that every course use the computer simply because "computer" is the current buzzword is just as bad as trying to tailor a curriculum into a standardized test (though luckily we don't do any of THAT).

I'm not saying that computers can't be used for the powers of good -- just that this is the wrong way to go about it. Require that every term paper be typed, and then provide library access or free laptops to low-income families that can't already get a computer on their own. Have students compare and contrast the use of Internet resources with encyclopedias. Teach students how to make a web page. There are easily fourteen million forty-seven better ways to merge education and technology than tossing laptops around like candy from a float in a Shriners' parade.

* 'wirelass' is a typo, but it's such a provocative one that I left it in.

Shoplifter had an overload in her pants

Worst holiday specials ever made

Manliness is next to godliness