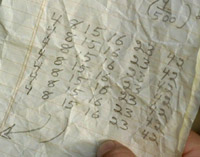 is now watching the first season of LOST (which he says is boring) and created his very first tag: How Do the LOST Numbers Apply to You?. The numbers are a series of digits that appear in many places throughout the show, which may or may not have any significance to the plot at large: 4 8 15 16 23 42.

4: The maximum number of cats you can have in a household for an extended period of time without paranoid feelings that they are everywhere watching everything, slowly taking control of your house.

8: I was eight years old when I was in fourth grade (4!). I have never played a game involving eight-sided dice (why would you ever need more than 6, which is halfway between 4 and 8?) Scratch that, I have played Scattergories which has more sides than your mom at a buffet.

16: The number of people I can think of off the top of my head that visit this site on a regular or semi-regular basis. Also the number of years until I will be forty-two years old (42!).

23: My age when I finally left school and entered the real world.

42: I earned 42 merit badges as a bona-fide member of the Boy Scouts of America. How many can you identify?

I will now tag Anna

as the only two people I know of who watch LOST and also have a blog. (This means that both Kim and Kathy are rat finks, but you both are welcome to reply to this tag in the comments section).

A message from beyond the grave

Worms write on a tomato