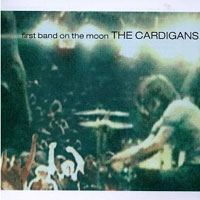 Cardigans: First Band on the Moon
When I hear a band I like, I tend to want to listen to the entire body of their work. First Band on the Moon is their second CD, released in 1996 when I was still a senior in high school, and has the only song people know in the U.S., "Lovefool". The Cardigans try to maintain their whimsical sound while adding heavier beats and more serious, artistic lyrics. Overall, it's successful but I prefer the music on the first CD to this one. You can definitely hear the evolution of their sound and the improvements in Nina Persson's voice though.
Prognosis: Skip it unless you're a diehard fan or you pirate music. Arr! 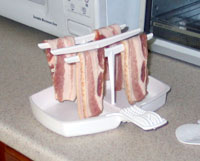 Makin' Bacon
My dad is currently reading a book about the economics of Walmart, and bought me this device, which is featured in the book. It's simple a $4 plastic pan with little clotheslines for hanging bacon. You place up to twelve strips of bacon over the drip pan, cover it with a paper towel, and then microwave the bacon for several minutes. This setup is supposed to allow the grease to drip off the bacon, making for more uniformly textured bacon and an easier post-meal cleanup. I tried it out yesterday and it works perfectly, AS SEEN ON TV. In five minutes, you have bacon that's as close to restaurant bacon as I've ever tasted, and you don't have to worry about a grease-splattered stove. There's really no downside at all to using it, and it's cheaper than buying ready-to-eat bacon or other bacon substitutes.
Prognosis: The best tool for making breakfast since the invention of the toaster oven.

Alias, Season 5
The fact that there were only seventeen episodes in the final season meant that I could watch them all this past weekend. Ultimately, the season was a little flawed (not because of the season itself, but because it had to piggyback off of a season that apparently ended the story) but still quite watchable, and had a sufficiently sappy ending. If you forgive its issues early on and just go along for the ride instead of trying to figure everything out, you'll start to get into an Alias "what happens next?" groove that hearkens back to the good old days of SD-6 and Phase Two. A few pieces of the big puzzle were lost to confusion, and the finale was a whirlwind of webs trying to tie everything together but they were as successful as they could have been given the circumstances. Because I have been watching and writing about Alias since these daily updates began in 2001, I'll probably write one last post to wrap it all up, and then you will never have to hear me talk about it ever again. What a bargain!
Prognosis: It won't change your life but it will please fans. If you've already gone this far, you might as well finish it off.

"You beat death, Arvin, but you couldn't beat me." - Jack Bristow

Robber should get a few bucks as a consolation prize