BU's First Law of Size: As products become smaller through miniaturization, the size of their packaging will change in the opposite direction.

The original Nintendo Entertainment System cartridges were comfortably big -- you could grip them under your thumb and slap someone across the face with satisfying sting and sound effect. Their packaging was roughly the same size so there was no wasted space. Today's cartridges for the Nintendo DS are smaller than a packet of Sweet N' Low. One of them actually got lost in the folds of my elbow flab yesterday (I shit you not!). However, these tiny cartridges are still packaged in containers that are the size of the old NES games, and to top it off (because all Americans are dirty shoplifters) retail chains put that package into a giant plastic anti-theft brace to make sure you don't hide the game in the folds of your mammoth American stomach as you walk out the door. 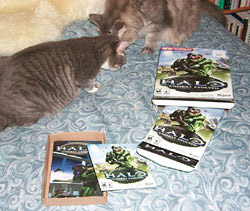 CDs and DVDs also obey this law. When I bought Halo in 2003 (subtitled "The Most Boring First Person Shooter In The History Of Shooters"), it came with no documentation: just a cardboard CD sleeve with a Microsoft authenticity key etched on the front. Since a game in a cardboard sleeve is usually a $9.99 budget game like Mah Jong or Urban Deer Hunting, Microsoft placed the sleeve into a normal-sized computer game box, roughly the size of a DVD case. This was then put into a larger box, much like the computer game boxes from the late 1990s. Every box had the complete Halo artwork and system specs on it -- it's almost as if they'd made too many of the big box and had to find creative ways to use them up. I half expected to open the cardboard sleeve to find an even smaller box, and maybe a tiny Santa figurine. 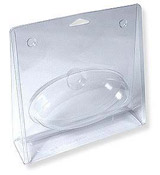 My second law of size is still undergoing peer review, but it mainly stresses that small people will inherit the planet because we consume less natural resources. The third law is still on the drawing board but it will attempt to codify the reasons why modern plastic package is so obnoxious to open, and why it tries to slice open your arteries when all you want to do is get to the tiny product inside.

People were confused by the designation of Biggie and Great Biggie

Just in case you were planning on it