Warning: This post contains minor spoilers about every season of Alias. No major plot points of season five are revealed.

It was Sunday, September 30, 2001 when Alias first premiered. I knew very little about it when I turned it on, but was intrigued by the commercial bombardment on TV, in newspapers, and even on the sides of buses. My initial impressions were: kind of neat, a little over the top, but a worthwhile diversion for one hour each week. So while all the rest of my friends were watching The Sopranos, I started tuning into Alias regularly. It wasn't until about halfway through the first season that I actually got hooked and became an annoying Aliasphile.

It's hard to explain in words why I'm so invested in the show when, as many friends who are sick of hearing about it point out, "it's just a show". This is true -- it is just a show, albeit a very well-done one, but it's my show. Alias came out just as I started grad school in a new state at the ripe young age of 21, and was something of a dependable escape throughout the years as I grew up and entered the real world. To an extent, we grew up together. It was the only show I'd every plan the rest of my schedule around rather than taping it, and gave me a reward to look forward to at the end of every week, good ones and bad ones. My love for Alias probably meets or exceeds Mike's love of Desperate Housewives, Kim's love of Gilmore Girls, or my mom's love of Buffy the Vampire Slayer. Even if Alias were a horrible, horrible show, it still functions as a yardstick in my memory, giving me pleasant historical milestones to go along with the events occuring in my life. To people who think TV is for the brain-dead, this might seem strange, but does anyone else understand what I mean?

For my last post featuring Alias ever, I thought I'd list some of my thoughts, memories, and gentle-hearted critiques of the show. Five years is an awfully long time. 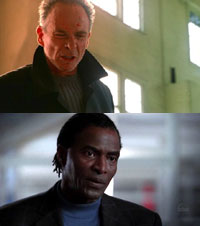 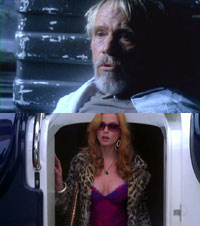 so take some pictures!

Where not to have sex

Pizza with a side of superheroes