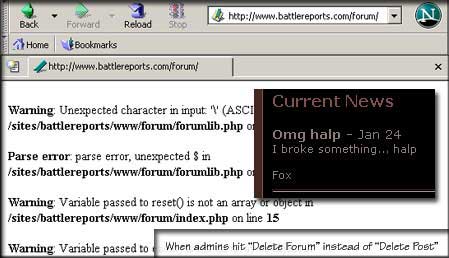 My thesis defense has been set now -- it will be March 3, 2003 at 3:30 PM. I went for a four person committee (Clendinning, Kubik, Spencer, Wingate) since I didn't realize at the time that a three-person committee was viable. Now that my preliminary draft is bound (courtesy of Mike's Binding) and submitted, the committee has two weeks to review it and offer suggestions. Then I make a final copy and wade through paperwork to announce the defense to the university.

There's an article about the post-Super-Bowl episode of Alias up at salon.com. You can read the entire thing by opting to watch a 15-second ad for Mercedes-Benz:

Nobody really understands why "Alias" is not a ratings smash. Critics love it, fans are obsessed with it, ABC is behind it and star Jennifer Garner has had more magazine covers than she's had hot meals. So what, exactly, is the problem?

The only explanation -- and the brain trust's current thinking -- is that the plot is too confusing. And it is. It is staunchly, proudly and maddeningly impossible to follow. You can't just drop in and out of "Alias." You have to account for your whereabouts. "Alias" demands loyalty, devotion and the ability to keep even the most Byzantine convolutions straight. And once you get into it, you really want to.

[...] 9.3 million viewers aren't enough, so as of Sunday, after the Super Bowl, a new, revamped "Alias" hits the airwaves. Weekly cliffhangers will disappear and new episodes will be more self-contained, requiring less knowledge of the previous week's episode. - Salon.com

I have Chapstick again. Medicated.