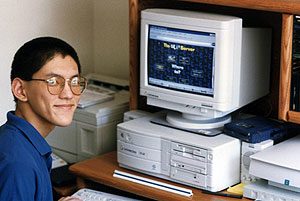 Next month marks the 16th birthday of this website, which has survived and sometimes even thrived as a barnacle of creativity on the Internet's hull since I graduated from high school in 1996. It had humble origins, hosted on my cutting-edge Pentium 60 (with uptime measured in how often I turned it off to travel home for school breaks), and has grown into a hugely popular website where I sometimes see two people visiting at the exact same time!

In honesty, the URI! Zone has gotten a little stale over the past couple years, as real life has reduced the amount of time I spend on it. Also, I have less of a need to seem witty on the Internet now that I'm no longer trolling for a wife. Recently though, I've been struck by occasional shrapnel of motivation to breathe some new life into my writing (generally when I'm sitting in traffic with all sorts of imagined free time in my head).

Whether I can successfully transform these whims into a revitalized blog remains to be seen, but it can't hurt to give my blog a once-over health check-up to see what's working and what isn't (though any ball-grabbing will be figurative). In spite of my laziness, I still do have something worthwhile to say, and promise to quit before I reach Garfield levels of inexorable awfulness. To equate the situation to the real world, I'm kind of like Chris Hughes, but without the millions of dollars, business savvy, or overarching vision of what I want to do in the next five minutes.

The primary lessons I've learned as a purveyor of light-hearted web content are as follows:

With these lessons in mind, here are a few types of posts I've written and what their futures might hold:

Museday Tuesdays: This series was great to keep my music composition degree fresh, allowing me to maintain a mininum skill level at orchestration in case I ever get a plum partwriting gig, but only one or two people ever listened to my amazing compositions. I would like to keep music (and maybe some trumpet playing) in the mix for future posts, but I'm not sure how I want to approach this.

Newsday Tuesday: This is my favorite type of post because I enjoy making fun of NASA or mocking badly written science. I would like to include more of these in the future, but they are easily the most time-consuming.

Review Day: I can regularly count on high interest in my Thursday posts about video games, DVDs, and CDs of music that no one else likes. These will continue forever!

Charts: It is very easy to make a chart, and charts are more popular than CDs of classical music remixed with ocean sounds. Expect many more of these in the future.

Contests: From Name That Tune to Captioning, I've tried to hold a contest at least once a year. The problem with contests is that the operating costs for the URI! Zone are about $250 per year, and giving out prizes greatly cuts into my advertising profits (0 dollars per month). However, it's fun to get or give away money, so expect these whenever I happen to rob an armored truck and have a surplus of cash (so, monthly).

Day-to-Day: Posts about stuff I actually do have been increasing, because that's honestly what a blog is supposed to focus on the most, and telling a story about what you ate for breakfast requires about as much effort as running for local office in Loudoun County as a Republican. I would like to use this space to provide more memories of ancient events -- a way to capture my thirty-two years of history before I go senile at 34 and forget it all.

If you have any feedback on things you have read, or suggestions for future posts, I would love to hear from you. How can I make the Seventeenth Edition of this website even better?