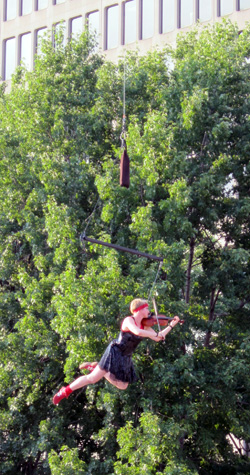 From Quebec City, we drove back down Route 40, catching a funny episode of This Is That

(3.4MB MP3) on the radio and stopping briefly in Trois-Rivieres for a lunch of barbeque poutine. Trois-Rivieres was a quaint town, but didn't seem to have much to offer for more than a few hours of entertainment. On the other hand, they were setting up a giant pool on the boardwalk for a wakeboarding competition, and a live chess competition was in progress. Nonetheless, we were back on the road as soon as the poutine was digesting, and made it into Montreal in the late afternoon.

Montreal was definitely a more urban venue than Quebec City -- in my sheltered suburban mind, a city is characterized by graffiti, panhandlers, visible social woes, the piquant flavor of urine infusing each bouquet of oxygen inhaled, and sometimes, a subway. For this leg of the trip, we stayed at the Hotel Les Suites Labelle. I chose it for two winning characteristics: it was built smack dab over the central subway station with easy access to almost everything we wanted to see, and it offered a daily buffet breakfast including eggs and sausage which was bland yet filling. Savvy travelers will know that a free breakfast is good for trimming a whole meal out of your budget (possibly two if you bring Ziploc bags and your room has a microwave). Eggs or meat are required to make it count as a free breakfast -- that "continental" garbage is a scam.

Our hotel was right across the street from a city park, Place Emile Gamelin, the site of a free circus performance which started within minutes of our first trip outside. Les Minutes Completement Cirque was a troupe of volunteers of varying skill levels with the noble goal of launching violas into space. Besides the usual number of dancers, bikers, and acrobats bounding over painfully unsafe city concrete, the troupe also solicited volunteers at the end and gave them all walkie-talkies to participate in a massive flash mob.

After a dinner of neverending pad thai on Rue St. Catherine (roughly on the border between the gay half and the less gay half), we wandered down to the waterfront for the International Fireworks Competition. Saturday night was Canada's entry in the competition, and they impressed us with some unusual, new varieties of fireworks, one of which looked like a hot dog. 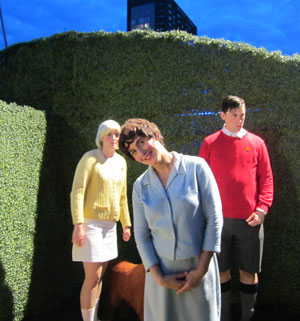 It seemed like everywhere we went in Quebec, there was a free festival going on. Canadians were so happy that the temperature had reached double digits, they were ready to celebrate any little event. During our Montreal stay, it was the Festival of Laughs, which we went to for three of our four nights. It was hard to get into any of the standup comedy because none of the comedians used the same slow diction found on my On y va! dictation tapes from the 1990s, but the Place des Arts was generally filled with all manner of crazy events or musical performances. (I also noticed that, for some reason, Canadian musicians exhort the crowd to clap on 1 and 3, not 2 and 4).

On one night, men dressed as horses led a parade onto a stage, followed by a motley crew of dancing aliens, a singing duo who may have been local stars, another singing duo who sang traditional Nunavit songs. The band, Duchamp Pilot, came onstage for some punk rock, while the acrobats from The Voala Project were suspended from a giant crane doing synchronized routines to all of the headbanging beats. The next night, we entered a labyrinth filled with creepy performance artists acting like slightly-off serial killers, and were awarded sample bottles of Pert Plus for our troubles.

For the most part, the continuing heat wave forced us indoors during the day. We took an English tour of the Notre-Dame (a church name almost as ubiquitous as Subway sandwich shops in each town) where we cosmically and coincidentally sat next to an older couple visiting from Alexandria, Virginia. We dropped ten dollars for the Montreal Center of History which was so interesting that we stayed in there for nearly four hours, enjoying snarky and sociology-laden exhibits. We went to the Biodome, filled with capybaras, puffins, and penguins, and followed it up with a visit to the BU wine bar, where we pretended to be classy while listening to a pretentious guy at the next table philosophize to impress his date. Whether it was about the wine or a book he had read, I could not tell, but it provided a nice backdrop to the delicious buffalo-sauce-infused tapas we had with our wines. 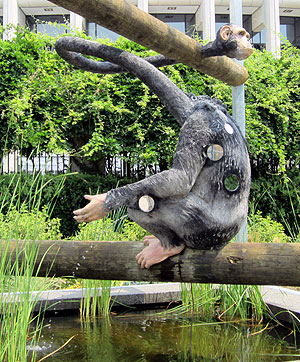 The only misstep in Montreal was the Contemporary Art Museum, which cost us $20 to enter. It was sort of interesting, but focused more on art that makes you question what to classify as art rather than cool pictures you'd want to put on your wall. Each work was accompanied by an awful thematic write-up which reminded me of my A.P. English days in which I faked my knowledge of Beloved. After a line of dead rats hanging from a tree and a five minute video of a wolf standing next to a fence, we entered a courtyard with a pissing long-necked monkey. That was about as good as it got, and the museum was so small that we couldn't even dawdle for more than two hours. The museum ended with a video of a Rube Goldberg machine that seemed interesting at first, but after the 80th rolling flaming tire and continuous fade-out shots which proved that the artist couldn't get it working in a single take, we noticed that the whole video was thirty minutes long and left.

For our mode of vacationing, three days was a perfect span to leisurely see everything in Quebec City, and four days was great for Montreal. On the 8th day of our trip, we would flee the cities and drive north to the mountain town of Mont-Tremblant. 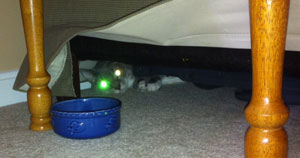