Canada Travelogue, Part I of III 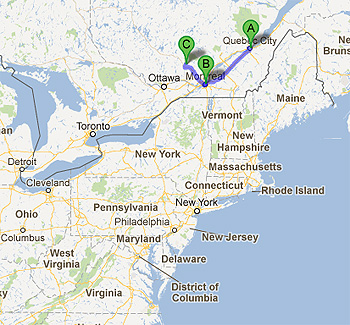 Our trip to Canada came about because we were too busy with school and work to plan our summer vacation earlier this year. Once May rolled around, flight prices were skyrocketing and choices were slimming. A Montreal-Quebec trip turned out to be the perfect antidote, and was easily one of the best vacations we've ever taken. Plus, the Canadian dollar is slightly depressed right now, so every time I withdrew $200 CAD from my bank account, I had the bonus euphoria of seeing only $195 US removed online. Thanks Canada!

Two Wednesdays ago, we woke up at the incapacitatingly early hour of 4 AM to fly into Montreal (by way of JFK). After an uneventful flight, we hit the road for Quebec City around noon. Driving in Canada is very similar to the US, apart from the increase in signs warning of moose collisions and the use of the metric system. Overall, driving in kilometers is a fairly unsatisfying experience because the numbers climb rapidly even though you don't seem to be getting anywhere any faster. I equate it to driving a Mercury Tracer. 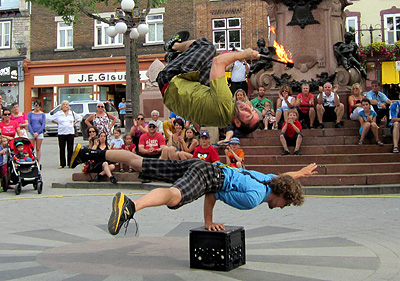 We checked into the Inn of the Two Lions, which was clean, quiet, and about a fifteen minute walk from the touristy junk. We spent our first night orienting ourselves to the city, watching street performers, and wandering along the top of the Old Wall outside the Old City (this wall would probably have been surrounded by barbed wire fences and harsh words in the US for liability reasons). We also scoped out the locations of all the Summer Music Festival events, a Festival we didn't even know about until days before our departure (I am an excellent travel agent). For dinner, we ate at Chez Victor, a crazy burger joint with all sorts of odd concoctions. I skipped the deer and lamb burgers and went for one sporting cream cheese, while Rebecca conquered the "Mountain Dweller" which was full of goat cheese.

Day Two in Quebec was already featured in my recent 12 of 12 post, and was characterized by an unnatural amount of walking. Quebec is situated on a promontory, a classic defense strategy that eliminates half of invaders from fatigue and heart attacks before a single shot is fired, and we walked between the high and low points of the city at least three times, trying to see as much as possible. We don't really plan vacations in the itinerary-sense: we just book the flights and hotels upfront and then figure out what to do on a day-to-day basis once we've arrived. 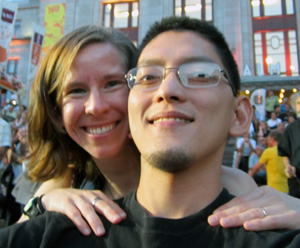 We stopped at the Place d'Youville around noon. Most guidebooks argue that it was named after a Canadian nun, but I'm fairly sure it was introduced so snarky Canadians could say "Welcome to Youville, population YOU" in the seventeenth century. We learned that by buying an overpriced beer from the local Pub Rickard tent, we could claim a table under an umbrella to escape the heat wave which had followed us from Virginia. We caught the tail end of a Cajun folk group, Canailles, and would later return for Boulevard des Airs (French world pop), Chinatown (pop rock), Chic Gamine (soul), and Caracol (folk pop). While wandering in the streets, we also caught performances of Gruv'n Brass (brass funk), and Fanfarniente della Strada (Busch Gardens fusion). This was just a subset of free performances -- there was also a headliner venue that featured Bon Jovi and Aerosmith, culminating on Friday night with... Sarah McLachlan? Something seemed out of order there.

We only hit two "traditional" tourist attractions, besides the endless supply of churches. On Day Three, in search of ways to get out of the heat, we went up in the Observatory for aerial views of the city. It differed from normal panoramas because it was no longer the tallest building in the city. We had a great 270 degree view of the cityscape and a not-so-great 90 degree view of the hotels next door. The Observatory was also filled with Fujitsu touchpads intended to provide info about city landmarks -- all they taught me was that Fujitsu touchpads have awful touch sensitivity. Later, we took a free, pleasantly understated English tour of Parliament, marred only by the combative American who spotted a prominent cross in the chambers and wanted to know why no other religious symbols were present. 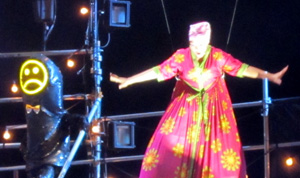 One event we made sure to catch was the free nightly performance of Cirque du Soleil, in a slightly seedy looking area of town under a highway overpass. Although initial glances made it appear like a leftover set from The Fisher King, hordes of people descended upon the site once the gates opened. The show was just as good as the expensive variety, full of contortionists, acrobats, people playing guitars on trampolines, and a plotline that would only make sense in anime.