the non-rhyming limerick of life 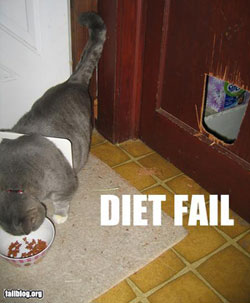 ♠ I'm 90% certain that this picture of a fat cat on failblog.org is NOT Booty, mainly because of the presence of a cat-door. Logically speaking, installing a cat-door into a real door defeats the purpose of the real door -- when I throw Booty out of a room, I want to ensure that she STAYS out. I suppose putting food in a box with a very small entrance might be a good exercise inducer though. 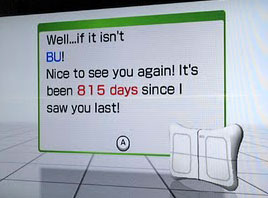 ♠ Speaking of exercise, I discovered Mike's (of Mike and Chompy) Wii Fit pad while cleaning out the basement and decided to fire it up to see what I've been missing. The device told me I hadn't exercised in over 800 days, which is longer than my marriage. (This is also why all of my Nintendogs ran away when faced with starvation). It still doesn't seem cost-effective to do a workout routine where you exert yourself for thirty second spurts between five minute loading screens -- it feels too much like watching commercials in a sitcom.

♠ Speaking of watching things, I finally got around to watching Harry Potter 7 Part 1: The Black Gate. It's a very dark movie, literally, since the colour palette rarely jumps above #3a3a3a and features a lot of black ghosts flying around at night in a thunderstorm during a total eclipse of the (dark) arts. The movie wended its way across various deciduous and non-deciduous forests for two and a half hours, and not a whole lot happened. I hear that the finale is jam-packed with action, which makes this pair of movies the anti-Kill Bill.

♠ Kill Bill was such a self-indulgent movie. We watched it at the beach in 2005 -- I think I fell asleep in the middle of it, and then fell asleep again while I was asleep.

♠ Plans for the weekend include dinner plans in Leesburg tonight, and some poker at Jack's house on Saturday, if we can break through the gridlock that's likely to result from the million motorcycle march that is commemorating 9/11 through traffic aggravation. Sunday is highlighted as a "do nothing" day in advance of Rebecca's first day at Physical Therapy School, and we'll probably use it to watch more of The Wire while eating popcorn and chocolate chip cookies.