the reason your kids are so popular

♠ You only have two days left to win a $15 Amazon.com gift certificate, in celebration of this site's 15th birthday. As of 10 AM this morning, there were only 6 contestants -- you don't want to lose to the guy that used a <blink> tag OR the guy that tried to use it and failed and then had to edit his post. 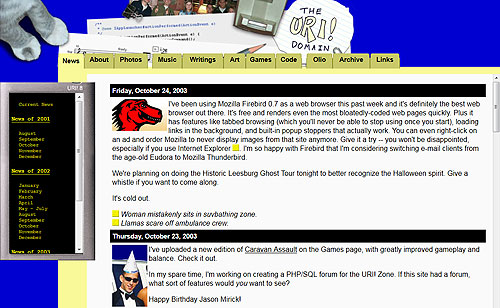 ♠ I also took the opportunity to give this page a very minor facelift yesterday -- by the age of 15, it should at least have a pair of hairs or maybe some boobies growing in unexpected areas. I'm trying new fonts as well -- this one may not be the final, but Trebuchet MS is getting stale. On the right, you can find link buttons to the various social networks I'm currently on. Hopefully someone comes up with an Enemy Registry, so I can join it and then arrange my buttons to spell FINGER.

♠ Of all my old designs, the shortest-lived one was also my favourite. The image on the right shows how the URI! Domain looked for four months in 2003, right before I purchased urizone.net. The manila folder idea was classy, and the concept of having a PDA that did all of the navigation in a folder was light-years ahead of its time. Plus, it had Booty's feet. What's not to love?

♠ Today, the site and its layout are distilled to their very essences, not unlike a very Asian batch of moonshine. No one EVER visited the "Code" section, which had CGI C++ scripts for making your own chat room, and the only people that went to the "Olio" section were people in search of material to plagiarize for English essays. Plus, I like to keep things clean.

♠ Speaking of cleaning, we finally have a dishwasher that does more than "make the dirty dishes warm" and it's taking some getting used to (We donated the old one to a Mexican restaurant as a tortilla warmer). I don't know how anyone can actually fill a dishwasher to capacity -- we usually have to start it at 50 - 75% full or we'll run out of dishes. On the bright side, the dishwasher is so quiet that it has dropped to fifth place on the list of "Reasons We Can't Hear the TV", behind the air conditioner, the fridge, Booty when hungry, and earwax.

♠ Booty likes to eat her own earwax. 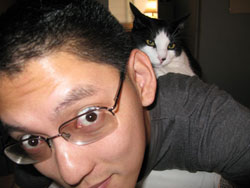 ♠ This is the final weekend of vacation before I head back to work on Monday. It's perfectly timed because I'm right at the point of boredom where I waste time redesigning my website and have to resist doing things for work. Over the past week, I've watched half a season of Home Improvement, started The Wire, played the indie game, Limbo, done some World of Warcraft which is starting to get boring again, and refired Torchlight.

♠ Plans for the weekend include a camping trip near Hagerstown, and cat care for the inestimable Titan. I may also respray the lawn for mosquitoes so we can start preparing for the Fall Barbequing season.

Teen buried in sand: 'I thought I was going to die'