Time is slipping away like the Fairfax butt slasher, and there's only one month until I turn 32. This weekend was a fairly low-key one, and started with a Friday night dinner at the Tortilla Factory next to a table full of young moms, one whose child was probably named Joanna, based on the "Jo Momma" shirt the mom was wearing. From there, we ambled down to the pulsing night scene of Herndon downtown to hear Herr Metal, an 80s hair metal cover band.

I did some DDMSence work in the morning on Saturday, followed by a Home Improvement marathon (where marathon is defined as "3 episodes") and a Game Night featuring Taboo and Costco mini quiches. Competition was intense, and by the end of the night there were an equal number of winners and losers. 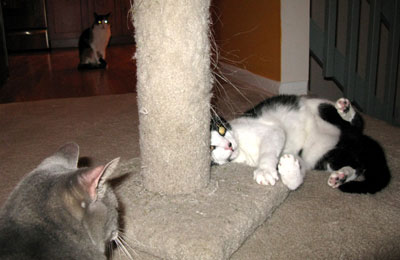 Sunday was IKEA day -- we drove down to Potomac Mills before it was overrun by massive plagues of yuppies and looked at choices for dining room tables. We settled on a style, but not a color, and walked out only with armfuls of seat cushions and pillows. After a brief stop at my parents' house to steal more seasons of The Wire, we returned home for a dinner of shells and cheese and more mini quiches.

Around 9, Chris stopped by to reclaim Titan after his week-long vacation, and the other cats were mostly sad to see him go.

Baby, you can park my car