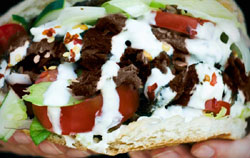 On Friday evening, we met up with one of Rebecca's coworkers from the physical therapy clinic for dinner in Leesburg at the Doner Bistro. A doner is like an unfried calzone filled with shredded meat and coated in enough cucumber sauce that the entire affair is a squeezed frog every time you take a bite. I had a bacon beer with my meal and we watched a torrential downpour introduce itself to a BMW-with-open-sunroof at the fancy restaurant across the street. We followed dinner up with dessert at Milwaukee Custard, also in Leesburg at a shopping center with one of every yuppy essential from Petsmart to Pei Wei.

I spent much of Saturday correcting my MIDI setup, and was able to reduce the input delay on my keyboard from half a second to a few milliseconds. Though it's still slightly jarring, it no longer feels like I am composing from the future, so I'll be more compelled to write Museday features on Tuesdays. We had dinner at Yamazato Sushi in Alexandria and then went to Jack's house for a guest-hosted game of poker (once you have kids, it's easier to let people host things at your house). Rebecca walked away with first place and $40, while Tom walked away with a fiver and five ones, essentially enacting a no interest exchange of the ten dollar bill he had arrived with.

Sunday was a quiet day, with Rebecca preparing for first lectures by watching videos about cadavers. I tried using the Wii Fit again, and finally noticed the option for setting the weight of my clothes away from the default of 2 pounds -- does anyone actually work out in 2 pounds of clothing? My clothes barely weigh two pounds at low tide. Because of the clothes differential, Wii Fit decided that I had gotten fat since the previous day, and asked if my weight gain was due to overeating or other catastrophes. Since "heavy clothing" was not an option, I went with "I don't know" and received a lecture about metabolism. It finally let me continue with the workout, and I was able to do two situps before summer had changed into autumn and it was time for dinner.

We closed the evening out with The Wire and Peking pork chops, simmered all day in the slow cooker.