In culinary terms, my weekend was a lazy cake topped with busy. Friday night was a relaxing night at home with sushi on the back porch. We tried the really cheap sushi from Safeway, which satisfied without being particularly delicious. Good if you crave sushi on the way home (and cheaper than Trader Joe's), but not as good as going to a restaurant.

Saturday opened with a trip to Costco for steaks and shells. In the afternoon we went to the Wine Tasting Bar in Reston Town Center with Page, who would be "Evil Paige" by virtue of being the second Paige we know except that she spells her name differently. The tasting bar was an interesting amalgamation of wine and capitalism -- you load up Winery Debit Cards with cash and then insert them into a machine that squirts a sample of the wine into your glass. Afterwards, we went to Uno's for pizza, served under the overly watchful eye of the overly friendly waitress. 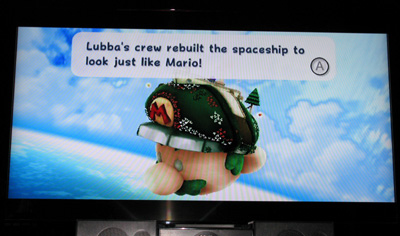 On Sunday, our plans to hike up Old Rag were cancelled because of tropical rainstorm conditions, so I purchased the new Super Mario Galaxy 2 game for the Wii, which is very similar to the first apart from the fact that Mario has a huge ego and flies around in a him-shaped spaceship.

In the evening, we ate at American Flatbread in Ashburn with Brian and Emily, which is even farther away than us Sterling-ites would usually travel for food. We followed this up with three and a half hours of LOST, arriving home halfway through the clip show.