how did I forget this tagline last week? 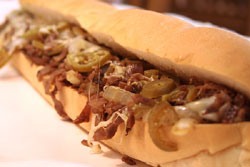 ♠ Last night after a run in the park, we went back to Omia's Pub and Grille for dinner where I had a delicious Supreme Steak and Cheese Sub, topped with mushrooms, onions, peppers, lettuce, tomato, and enough mayonnaise to cement a house together.

♠ For a fun trick to freak out your friends: wash out a mayo container when it's empty and fill it up with plain yogurt. The next time someone comes over, pull the mayo jar out of the fridge and nonchalantly start wolfing it down with a spoon. Delicious!

♠ There's a song on one of my Dr. Demento CDs from the 90s called "Delicious", which features two people getting increasingly tipsy and saying "Delicious!" over and over. I never found it funny, but I was never really into intellectually challenging humour. Just make a pun about farts and your stock will instantly rise in my eyes.

♠ I think it's strange that they still don't have an explanation for the day the stock market dropped eight billion points in seconds last week, but then, I'm also someone who's skeptical about the fact that Apple could unintentionally lose two next-gen iPhones in two weeks. I'm guessing some fund managers were having some fun(d), and wanted to see how many banks they could make fail in an hour.

♠ Speaking of banks that fail, when I closed my Bank of America account in 2003 and moved back to Virginia, they tried to keep the 800 dollars I had remaining in the account. Their reason was that they tried sending it to my old address and couldn't locate me, even though I had given them the new address. BoA definitely puts the douche in fiduciary.

♠ I'm happily under the umbrella of federal credit unions again now, and haven't had a banking related problem in months, not including Monopoly money.

♠ I don't have any big plans for the weekend, though I'll probably be releasing a new DDMSence version tonight -- the next release will probably let you watch television shows in XML, depending on how ambitious I am this afternoon.