There are no spoilers from the finale in this review, although I do mention details from earlier episodes. 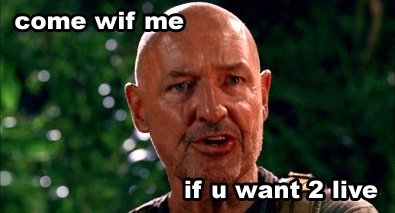 In the end, the LOST finale was about as good as it could have been. The writers opted for moving the needle towards a "warm and fuzzy" satisfying ending, rather than some sort of Sopranos brain-freeze, but the ending they chose left far too many major questions unanswered in an attempt to give all the characters a happy send-off. The closing scenes, which tug at the heart strings during a first viewing, become increasing irritating as you start to think about how irrelevant earlier plot points become in their wake.

In my opinion as a highly paid television critic (and despite the fact that the highly paid part has nothing to do with the critic part), they committed to the wrong course for the story when the island started "flashing through time" last season. Everything from that point was a temporal mess, with too much time wasted on new characters and side trips into the past. I can't decide whether it's a worser sin to drag the story out (as they did in Season Three), or to spend whole episodes on side plots that just don't matter. A prime example of this was the "Jacob and his crazy mom" episode, which was 100% unnecessary backstory.

Not all of this is the fault of the writers though. One of the original draws of the show was the mystery surrounding each character. By the third season, we knew all of the characters inside and out, so the show had to reinvent itself a bit. I thoroughly enjoyed the fourth season, which was the first season showing the future, but spent the entire fifth season bored and waiting for Charlotte to get off the show.

I live blogged my satisfaction levels during the finale on Facebook, starting at 95% because I'm a very easy grader. I liked the LOST-themed Target commercials, and general sappiness. I didn't like "Sayid's true love", the fact that the heart of the island resembled a deleted scene from Legend of Zelda: Ocarina of Time, the fact that manipulating the heart of the island involved inserting or removing a giant stone penis from a hole in the ground, the overuse of the same melodies, the fact that everyone's "memories of love" started blending together into tedium by the end, and how retarded Leonardo DiCaprio's new movie looks. I thought it was cute that my local ABC affiliate tried to get into the LOST fever by advertising "feedback from LOST fans at 11!", not realizing that they had been preempted by the extra long LOST which ran to 11:30.

I ended at an 89% satisfaction level for the episode, but that would probably drop to an 80% after a few days to mull it over. In the end, I enjoyed the series as a whole, but felt it would have been greatly improved with about 1.5 fewer seasons of filler.