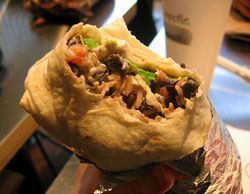 On Friday evening, after releasing DDMSence 1.3.2, I braved the unhealthily clogged artery that is southbound 7100 to play volleyball with some of Rebecca's friends from work, and we ended up playing for nearly three hours. I am now like an abused spheroid, as there are bruises on my radius and other bones. Post-volleyball dinner was a Chipotle burrito, which tastes delicious but can be rather nauseauting if you picture the entire blob of calories resting whole in your stomach.

Saturday was split into two doses of family time -- the first with Rebecca's family in Maryland, and the second at the Reston Festival (the Restival) of Fine Arts. The entire town center was blocked off and filled with tents of liberal arts majors from all over the country, hawking their $160 straw hats (wearable art) and weird Tim Burton-inspired sculptures made out of baby heads. While gazing upon a $500 watercolor with bits of old newspaper glued in random patterns, I realized that art doesn't impress me unless it looks like some minimum level of effort went into it.

Sunday was a mostly lazy day although I had to leave the confines of my chair to mow the lawn before the upcoming monsoon. In the afternoon, Rebecca and I played some badminton in the back yard, although we made a rule that we have to play at least three times this month before we're allowed to put up the net. In most years, we put it up for the first game and then never play again.

"cocking the memo book," a practical joke in which officers draw penises in each other's daily notebooks.