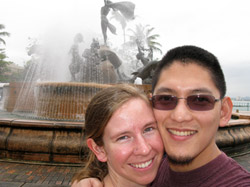 Pictures from our recent trip from Puerto Rico, as well as older pictures from snOMG can now be found on the Photos page.

We did not get a picture of the ramshackle bar in Fajardo (a city which sounds unfortunately close to "hard on") which was named "DRINKERS Irish Pub" and adorned with a Spanish leprechaun, but it would have been appropriate for today's holiday.

One of these days, I'll get around to writing more about Puerto Rico, but this week is a little busy!

New Jersey mom aspires to be the world's fattest woman