Memory Day: A Decade Ago 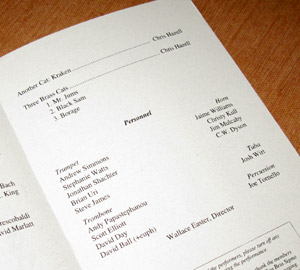 "Five million, two hundred fifty-eight thousand, eight hundred and eighty minutes" is long in both the temporal and literal senses -- it would not have made a catchy lyric for any plays about AIDS, but it does accurately represent how long it's been since my fourth year at Virginia Tech. I'm not even any taller today than I was back then, unless height can be measured in circumference. 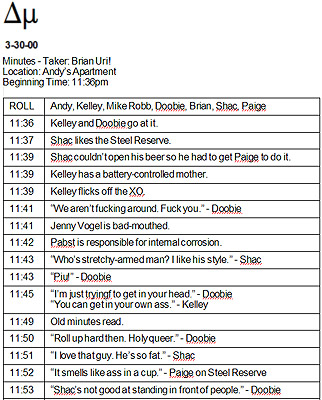 March 31, 2000 was the day after the VT Brass Ensemble concert, which featured too many trumpets, and four songs about cats. My parents were in town for the concert, which was followed by a parentless Delta Mu meeting at Andy's apartment in Foxridge, where a really shy girl named Paige was implanted into the circle of friends for the first time. (Paige now works as a spy for the State Department, traveling to Spain and Russia under the alias of Michaela Vaughn).

April 1, 2000 was the original release date for Augmented Fourth, which I've already devoted far too much News space to, but which I like to pat myself on the back about as one of the few other massive projects I ever carried to fruition. Based on my low success rate, Fruition is probably a town just over the border from Motivation, and definitely requires an unexpired passport to visit. (Like an annal bookend, DDMSence v1.0.0 will be released tomorrow, exactly ten years after Augmented Fourth).

On the academic side, I was still pursuing the double major at a stately pace (think Iowa, not New Jersey) starting with a morning session of Conducting II (which also suffered from an overabundance of trumpets). On the tech side, I was taking a course on 3D Computer Graphics, which advertised itself as a learning experience in OpenGL but ultimately turned into endless permutations of the phrase, "If the point is on the other side of the wall, you don't have to draw it!" I could have self-taught the material by filling a notebook with the words "viewport" and "pixel" and illustrating it with rhombuses.

My other major class of the day was "Intermediate MIDI Applications", where we learned that MIDI was going to take the music world by storm very soon, or as Jack Bauer would say, within the decade!

Life gets exciting when you get old

Man doesn't quite get the concept of Prison Break

Other man doesn't quite get the concept of Prison Break