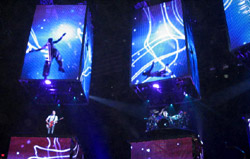 Before flitting off to Puerto Rico on our $230 direct flights out of Dulles last week, we went to the Muse concert at the Patriot Center with Ben (of Ben and Anna). Here are my thoughts on that concert.

Seating:
Because we were unsure about what it would take to get a good standing spot in General Admission, we lined up in the cold around 5:30 for the 8:00 concert (others had arrived at 9 AM). This put us about halfway back in the line, and we ended up getting good spots about 6 rows back from the front for the cost of frozen toes and three hours of being bored. Since Muse spent most of their concert on giant pedestals in the sky, being in the very front would have been overkill (and horrible on the neck). Sixth row was a good spot for my first concert, but in the future, I'd probably go for a nice seat and show up five minutes before 8. It was also nice to see almost everyone in the crowd (even those with seats) standing, dancing, and participating throughout the concert.

Opener:
The Silversun Pickups opened and played loud music with a wash of identical timbres and no dynamic shape. If you were to record their music and look at the waveform, it would resemble a tapeworm. I tried to get into them but the lead singer's voice really irritated the snot out of me -- he consistently sounded like a slightly put-upon Smurf in a production of RENT. 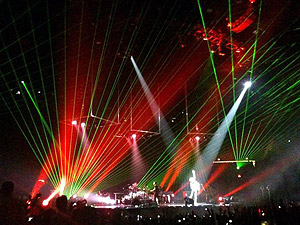 Theatrics:
The theatrics of the Muse portion of the concert were ridiculously over-the-top, from laser light shows to giant crowd balloons painted like eyeballs, but it matched the bombastic nature of their music which they seem to take proud ownership of whenever anyone compares them to Queen. SSPU performed on a very tiny stage dwarfed by three giant skyscraper props. For Muse, the props became giant screens alternating between shots of the band and artistic eye candy to go with the songs, and Muse descended out of the innards of the props (much to the relief of the ticketholders who had seats behind them). In at least one song, the drums were hooked up to various window lights on the skyscrapers.

Music:
Muse played for two full hours, using a set list of 17 songs and 3 or 4 impromptu interludes. The songs were weighted towards their most recent stuff, which was expected, and their musicality was just as effortless and polished as what you hear on the albums. Two of the things I dislike about live performances (bad singing and sloppy technique) were nowhere to be found, and it's amazing to hear GOOD live falsetto. I also like how "clean" the drums sounded -- SSPU could have learned that there are more instruments available than the crash cymbal. The band closed with Unnatural Selection which is almost as good of a finisher as Knights of Cydonia, and then came back for an encore of four more songs (using Cydonia as the final finale).

Final Grade: A+, especially when the tickets were $55 and I didn't have to listen to U2