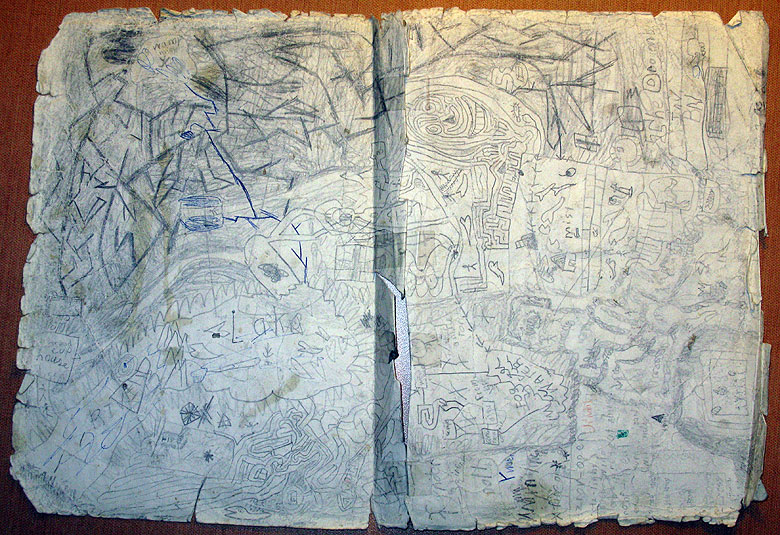 It was around September of 1988 when I decided I could invent games just as cool as Infocom text-adventure games by drawing mazes on paper, and this was the first one I ever did. I now have a folder of over fifty, a mix of traditional mazes, Infocom box-style maps, and other images, and my fourth grade compatriots would crowd around the lunch table going through my mazes while I directed the action. None of us had ever heard or played Dungeons and Dragons (and to this day, I've still never played it), but I'm guessing it was roughly the same idea, without the numbers and nerd-stigma. 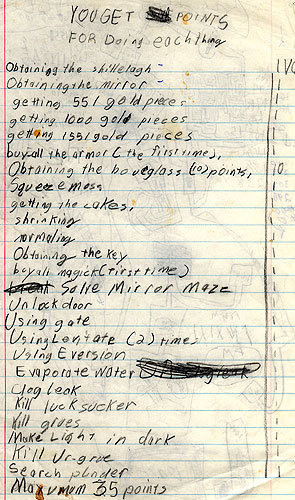 This was one of the score sheets from my lunch games, and the fact that I spelled "shillelagh" correctly means it was probably during the period when I was playing Beyond Zork. Apparently, the reverse of shrinking is "normaling", and tragically, getting the cakes is only worth 1 point. Since the points actually add up to 34, I was either bad at math or there was a secret point.

My scanner conked out before I could scan the rules page for my board game version of the book, Island of the Blue Dolphins, but you can probably get the idea from these excerpts:

OBJECT: Move Karana across the island to where the white men will take her to another island.

Sounds repetitive, with a slight tinge of slavery -- all the aspects of a good board game.

MOVING: Roll the dice and move that amount of spaces. You MUST do yellow squares if you pass or land in them.

SUPPLY CARD: When you take a supply card, keep it until you use it. When you use it, put it under the pile. If all cards are gone, each player must give back 5.

Cards frequently ran out because I got bored while making the deck out of construction paper. Luckily, communism solves everything.

RIVERS: There are two rivers. You can't cross unless 1) you have a canoe and 2) you land on the dock.

BONUS: In bonus rounds, you can get a whole bunch of supply cards or roll alot.

I have no recollection of how you trigger a bonus round, but it probably involved paddling across the river and missing the dock. WHEE.