a goofy keychain in the Cracker Jack box of life 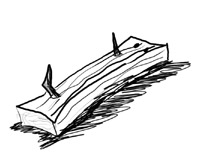 ♠ Now that all the major home renovation is done and there are no further rusty nails to remove from my basement, I thought it would be the perfect time to renew my tetanus vaccination, which has lapsed like a bottom drawer gift card ever since I went to summer camp in 1991. I got the new booster at the same time as a Hepatitis A vaccine to ward me from all the hep cats I will meet traveling next month. 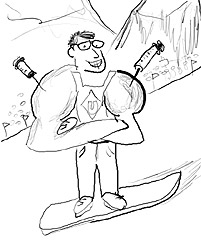 ♠ As a result of the shots, my shoulders are both swollen up like one of those short, self-conscious body builders at the gym. Until the white blood cells can quell the civil unrest in my deltoids, I could easily get a fast start out of the gates in a Winter Olympics sport of my choice.

♠ We watched a minor amount of Olympic hubbubbery, even though it required us to turn to channel 4, which hasn't happened since Friends was on the air. The competition in the sports that I saw were not particularly awe-inspiring, and the recycled metal medals looked ridiculous, like crudely hammered devil banes you might find in the special traveling Smithsonian exhibit titled, "Old Crap".

♠ The commercials in the Winter Olympics were more boring than the snowboarding, and no one was on a horse. To pass the time between rounds, we Rebecca flipped over to The Bachelor, where the finalists were narrowed down to some chick with an annoying voice named after an Orange Line Metro station, and another with an annoying voice named after a Red Line Metro station (and in a surprise ending, the third finalist got to go home with Joe Millionaire). 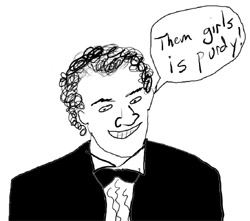 ♠ Back when we were all living in Tallahassee with nothing to do, we actually gathered at Mike's (of Mike and Chompy) house to watch Joe Millionaire. Where did all the free time of our youth go? This was also a period where I would rent four movies per weekend and finish them all by Sunday.

♠ Speaking of movies, for Valentine's Day, Costco-Sterling was combining their stock of old movies into "His-Hers Valu-Paks" (because printing the "e" lowers the valu). Unfortunately, I saw at least one bundle with a His movie of The Italian Job and a Her movie of The Transporter. Maybe chicks just dig Jason Statham.

♠ Plans for the weekend include a little work and some taxes. I might also get around to redoing my will -- now that I'm married, I need to remove Mike (of Mike and Chompy) as the sole beneficiary before he takes an opportunity for murder. Finally, we'll continue planning our trip to Puerto Rico, which is only ten days away!

Mechanical bull tougher than it looks