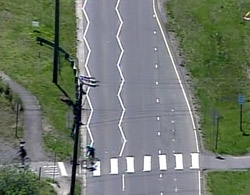 ♠ Yesterday, while driving down to DISA for the eight hundredth time, I saw road crews busily erasing the dotted white lines from Sterling Boulevard and replacing them with pinked zigzags of merriment. I had half a mind to steer the car as the zigzags dictated, but then remembered my experiences from childhood, where zigzagging my bike always resulted in a crash of some sort.

♠ I presumed the lines were to warn motorists of the bike path and found out that I was right. That article's a little too short to mock in a Newsday, but I'd definitely like to mock the fellow from Connecticut who's complaining about having to walk his bike across a four-lane highway. The appropriate solution would be a bridge or a tunnel.

♠ The other day, while driving past my old middle school, I saw students in their ugly gym uniforms riding bikes in tight circles around the fenced-in tennis court. As each kid got their chance to bike for 100 yards, they dismounted and gave the bike to someone else. I don't know where the school got the funds to buy twenty communal bicycles, but I'm guessing that's why some of the students still have to learn in trailers next to the school. 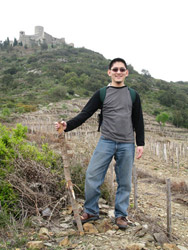 ♠ The students who didn't want to ride bikes were walking slow circles around the track, gossiping and getting their heart rates up over 50 to avoid obesity. Back in my day there were always 3 or 4 of them, but now it's almost half a class. We always hated the Perpetual Walkers in our class because never had to do a thing, and the gym teachers had long since given up on motivating them.

♠ I've been perpetually walking in my new brown shoes for over a month now, and still haven't encountered the curious knee wasting disease that afflicted me when I was walking all over Europe. For the better part of two weeks, I hobbled through subway stations like a gimp with an uneven pegleg.

♠ Plans for the weekend include lots of work, unless we finish successfully this evening. Maybe I'll even get a birthday dinner into the mix (though not my own). What are you doing this weekend?

♠ Happy Birthday to Pip and Andrea! Have a great weekend!

He certainly has never stolen a pig

Black is the new black

Man pretending to fall off bridge falls off bridge