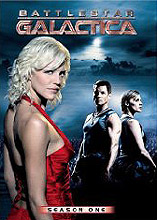 Battlestar Galactica: Season One:
This show has a relatively huge following, and the entire series recently ended, so I figured it'd be a good candidate for a new show to watch. The first season opens with a three hour miniseries pilot and then about a dozen more episodes.

I've never really gotten into space shows -- I could care less about Star Wars or Star Trek, so I may not be the target audience. However, I thought that this show was reasonably entertaining, although sometimes it felt like something intangible was missing. Firefly was several orders of magnitude better, but this series would be good enough to keep you watching.

The effects are pretty solid throughout, although sometimes they veer towards the cheesiness of the first ten minutes of the Firefly pilot, which almost make you embarrassed to be watching. The show really overuses the effect of quickly zooming in and out to show the sheer magnitude of spaceships -- once is enough. Dream sequences are also overused, almost to Sopranos-like extremes, and usually they're just an excuse for a hot half-naked chick to walk around to increase viewership.

The bottom line: If you were to take Firefly, give it characters that you care less about, and include the annoying lady from Dances with Wolves, you'd end up with this show. Since my other shows aren't releasing new seasons anytime soon, I might pick up another season, but I don't need to keep watching.

Woman sends a stripper to her high school reunion